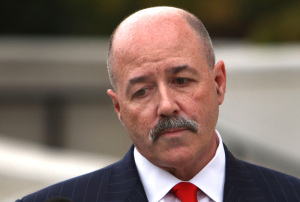 Never mind the baggage of his high-profile crash and burn — he wants to be taken seriously as a voice of reason.

“No one with my background has ever been inside,” Kerik told The Associated Press. “I know the truth about it. . I know how to fix it. I just hope someone will listen to me.”

Kerik, 59, walked out of a minimum-security prison in Maryland in 2013 after serving just over three years of a four-year sentence for tax fraud and lying to the White House during his vetting process for Homeland Security secretary. In his book, “From Jailer to Jailed: My Journey from Correction and Police Commissioner to Inmate #84888-054,” he admits it took being sent away to prison to recognize the injustices found there.

He writes that in too many cases, prison “is a colossal waste of time and life. I didn’t understand this when I was warden and commissioner, I’m embarrassed to say.”

Even today, he adds, “I don’t feel whole anymore. The system beats you down.” He calls someone losing their freedom “like dying with your eyes open.”

Kerik devotes long passages of the book to his better days, when he reduced jail violence on Rikers and later led the nation’s largest police department in the aftermath of 9/11. But his nomination by the Bush White House for the Homeland Security post in 2004 was met with a rash of news reports about stock-option windfalls, shady apartment renovations with the publisher of his first memoir at an apartment near ground zero that had been set aside for rescue workers.

His decision to withdraw his name for consideration for the cabinet post and his later indictment in 2007 embarrassed Giuliani, then a prospective presidential candidate. A subsequent investigation led to Kerik pleading guilty to federal charges in 2009.

But if readers are looking for contrition about his crimes, they won’t find it. In the book and in person, Kerik is unrepentant, still insisting he was the victim of a political witch hunt by overzealous prosecutors.

“I’m not saying I’m an angel, but the way they went after me was crazy,” he said.

He writes that in prison, he passed the time doing endless push-ups, reading books — “The Count of Monte Cristo” was a favorite — and making friends with white-collar and drug offenders serving excessive sentences.

Jailers “never ask, ‘Is the guy in here because he did something wrong, or because he couldn’t afford a lawyer?’ … I saw so much of that in prison,” he said in the interview. “It had an impact on the way I thought. It’s no joke.”

His lowest moment came when he was forced to spend several weeks in solitary confinement in a lower Manhattan jail because, with his notoriety, he needed to be segregated from other prisoners there. The experience, he writes, taught him “policies on solitary confinement must be seriously looked at and constantly evaluated. Misused or abused, it can be torturous, inhumane and mentally devastating.”

In the past several months, Kerik has been busy promoting the book and an advocacy group, American Coalition for Criminal Justice Reform, with TV appearances, book signings and speaking engagements.

Kerik comes off as credible, said defense attorney Joseph Hayden, the moderator of a recent panel discussion that included Kerik at New Jersey conference on how to reduce recidivism.

“He’s been on both side of the equation,” said Hayden, who hadn’t met Kerik before preparing for the conference. “As it’s been said in literature, ‘One gets wisdom through suffering.'”

Still, the skeptics haven’t gone away: Kerik still receives hate mail. And Rolling Stone called the new book “awful” and “a con job.” He says he shakes it off.

“You’ve got to take that stuff with a grain of salt,” he said. “I’m really not a bad guy.”