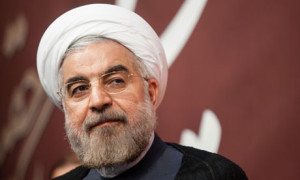 Iranian President Hassan Rouhani on Wednesday dismissed pressure from the U.S. Congress over a preliminary deal on Iran’s nuclear program, saying that Tehran is dealing with world powers — not American lawmakers.

In a speech to tens of thousands of Iranians in the northern city of Rasht, Rouhani said his nation is pursuing a “dignified” agreement with the six-member group — the United States, Russia, China, Britain, France and Germany.

Rouhani’s remarks were an apparent reaction to developments Tuesday in Washington, where President Barack Obama bowed to pressure from Republicans and Democrats and agreed to sign compromise legislation empowering Congress to reject a final nuclear deal with Iran. The legislation is now expected to sail through both houses of Congress but it is unclear how it will affect the ongoing nuclear talks with Iran.

Tehran and world powers reached a framework agreement on the deal earlier this month. The deal, which is to be finalized by June 30, is meant to curb Iran’s nuclear program in return for lifting of crippling economic sanctions imposed on Iran.

The disputes between the Obama administration and the Congress are an “internal issue,” Rouhani said.

“Our partner is not the U.S. Congress or the Senate, our partner is a group called ‘5+1,'” Rouhani said, referring to the six world powers — the five permanent U.N. Security Council members and Germany — that are negotiating with Iran.

“It has absolutely nothing to do with our government and nation what … U.S. representatives or hard-liners say … We are looking for reciprocal … good will and respect,” he said.

Rouhani reiterated his stance expressed last week that Teheran will not sign on to any final deal with the six powers unless all economic sanctions are completely lifted.

“If there is no end to sanctions, there will be no deal,” said Rouhani.

A 2011 IAEA report indicated that large-scale high-explosive experiments were conducted in Marivan, near the Iraqi border.

Talks with the IAEA are parallel to Iran’s nuclear negotiations with world powers. Iran insists its nuclear program is for peaceful purposes only such as power generation and cancer treatment.