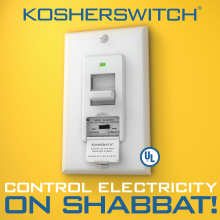 It is an Indiegogo project. As of this writing, approximately $40,000 has been raised to market something called Kosherswitch – a technological device for Shabbos that will allegedly allow a person to allow the light to turn on. What you have just read is not a typo. This is the “legal mechanism” which is used by those backing the project. The project has a website and a youtube video designed to promote the item. The advertising literature makes a lot of claims. These claims need to be examined for accuracy.

HOW IT ALLEGEDLY WORKS

The Youtube video promoting the device has a section in it that this author finds, distasteful in the extreme. An ostensibly religious man, searching for a Shabbos goy (a woman in this case) inadvertently crosses a moral line. There is no question in my mind that the Rabbis who appear in the promotional video would never have agree to appear in it if they knew that there was innuendo of such a nature in the promotional material. The Rabbis were clearly misled. The question is, were these Rabbis also misquoted? But before we go there – let’s get some basic halachic terms and concepts down.

Grama means a “causation force” rather than a “direct force.” The laws of grama on Shabbos are derived from the Talmudic passages of grama in damages and in murder. Not that “causation force” is permitted, necessarily. At times it is forbidden by Rabbinic decree. The Shulchan Aruch and Ramah (OC 334:22) rules that a grama is forbidden on Shabbos except in cases of loss or great need.

The trick then is to create a switch that would halachically not even to be considered a grama – a causation force, but rather a semi-Grama. The makers of the KosherSwitch claim that they have accomplished this – the manufacture of a switch that does not even constitute a grama. But did they?

We must first understand what the halachic status of a general electric switch is. Our system of alternating current (AC) is in actuality a river of flowing ions moving back and forth as they pass around an electric circuit. If the circuit is blocked, the ions stop flowing. When the break in the circuit is removed, the ions continue flowing and eventually turn on the electric light. Indeed, Rav Chaim Ozer Groszinsky zt”l believed that the electric light switch was a direct force – so much so that he even recited havdalah on an electric light switch!

But according to our explanation, a regular electric switch should be considered a grama – a causation force and not a direct force. Why? Because the switch is only removing the prevention to the flow of electrons. It is not causing the electrons to flow, it is merely removing the impediment to their flow. That should be a grama, not a direct force!

Halacha, however, views this either as direct force or as a forbidden type of grama. The reasons why this is so is subject to some debate. Primarily, the immediacy of the causation force makes it as if it is direct.

What are the halachic factors that would make something that is causative a semi-Grama rather than a Grama?

There are three main approaches in the Poskim:

1. Some Poskim hold that if there is a delay in time between the person’s action and the result then it would be considered a semi-Grama.

2. Other Poskim hold that if the secondary action will not perforce occur then the causative action is not even considered a grama. In other words if it is not definite that the secondary result will happen – it would be considered a semi-Grama, not a Grama.

3. Yet other Poskim hold that if it is not the normal way in which this causative action is performed – then it is considered a semi-Grama.

The inventor attempt to address all of the various approaches, but the question is are these really adequately addressed?

Another question is while it is true that the light emitting diode may not work the first time, nor the receiver, but after a series of them, it is a mathematical certainty that the secondary action will happen. Who says that the criterion of whether it will definitely happen is determined by one and not the aggregate total? While it is true that previous versions of a gramma-switch allowed for this leniency, it is my understanding that many Poskim disagreed with it.

Yet another issue about this switch is whether it will train children to turn on and off lights on Shabbos in places that do not have the KosherSwitch. There is a product called “NearBeer” that does not contain significant traces of alcohol. Is it a good idea to give our pre-teens and teens “NearBeer” simply because it contains no alcohol? The results might be devastating. To make the KosherSwitch available to all would undermine Shabbos observance and proper Chinuch.

Finally, there are a number of Rabbis who have been quoted to the effect that they permit it entirely, when in fact they only issued their permissive ruling under certain caveats. For example, this author saw a letter from Rav Harpenes (Author of ishmas Shabbos) that states that he only permitted it for hospitals or for nursing homes. Other Rabbis say that there is an issue of Zilusa d’Shabbsa – denigrating the Shabbos and that each person must ask his own Rav or Posaik.

A technological development with such far-reaching repercussions should be presented to the outstanding Gedolim of the generation before it is presented to the general public. If this switch was developed in 2014, or 2015 that would be one thing. The KosherSwitch has been around since before 2011 – plenty of time to have been presented to Rav Elyashiv, and yet he did not back this device.

It is this author’s view that the switch does not reach the criterion of semi-Grama according to the majority view of Poskim. There are serious dangers involved in Chinuch and the promotion of this technology. It can also precipitate a new slippery slope where the very concept of Shabbos can be undermined, Chalila.
The author can be reached at [email protected]