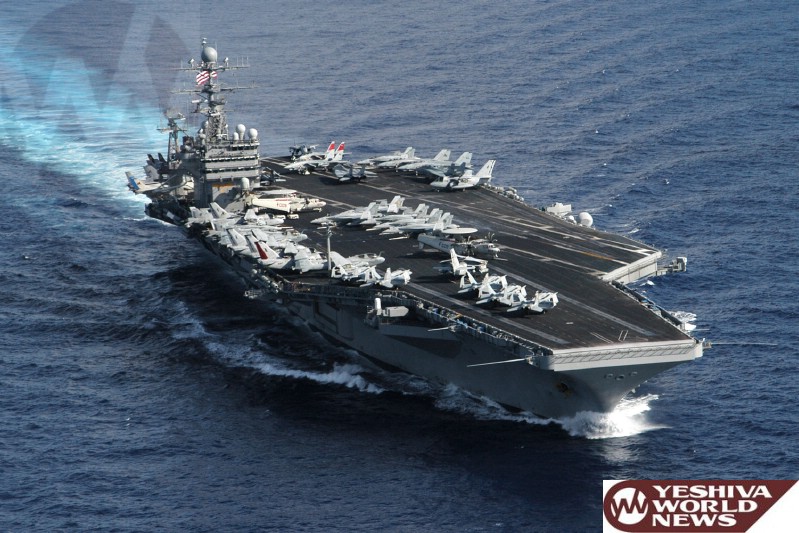 In a stepped-up response to Iranian backing of Shiite rebels in Yemen, the Navy aircraft carrier, USS Theodore Roosevelt, is steaming toward the waters off Yemen to beef up security and join other American ships that are prepared to intercept any Iranian vessels carrying weapons to the Houthi rebels.

The deployment comes after a U.N. Security Council resolution approved last week imposed an arms embargo on the Iranian-backed Shiite Houthi rebels. The resolution passed in a 14-0 vote with Russia abstaining.

Navy officials said Monday that the Roosevelt was moving through the Arabian Sea. A massive ship that carries F/A-18 fighter jets, the Roosevelt is seen more of a deterrent and show of force in the region.

The U.S. Navy has been beefing up its presence in the Gulf of Aden and the southern Arabian Sea in response to reports that a convoy of about eight Iranian ships is heading toward Yemen and possibly carrying arms for the Houthis. Navy officials said there are about nine U.S. warships in the region, including cruisers and destroyers carrying teams that can board and search other vessels.

The officials spoke on condition of anonymity because they were not authorized to discuss the ship movement on the record.

Saudi Arabia and several of its allies, mainly Gulf Arab countries, have been trying to drive back the rebels, who seized the capital of Sanaa in September and have overrun many other northern provinces with the help of security forces loyal to former President Ali Abdullah Saleh. The U.S. supports the Saudi campaign.

Western governments and Sunni Arab countries say the Houthis get their arms from Iran. Tehran and the rebels deny that, although the Islamic Republic has provided political and humanitarian support to the Shiite group.

The U.S. has been providing logistical and intelligence support to the Saudi coalition launching airstrikes against the Houthis. That air campaign is now in its fourth week, and the U.S. has also begun refueling coalition aircraft involved in the conflict.

White House spokesman Josh Earnest would not comment specifically on any Navy movements in Yemeni waters, but said the U.S. has concerns about Iran’s “continued support for the Houthis.

He said “the Iranians are acutely aware of our concerns for their continued support of the Houthis by sending them large shipments of weapons.”

The expanded U.S. Navy activity in the region comes at a sensitive time, as the U.S. and six world powers have reached a framework deal with Iran to control its nuclear program. Since the preliminary deal with reached on April 2, Iran and the U.S. have been disputing the details of the deal. And on Monday, a lawyer for Tehran-based Washington Post reporter Jason Rezaian said Tehran had charged Rezaian with espionage and three other crimes. The Obama administration dismisses the charges as “absurd.”

The U.S. Navy generally conducts consensual boardings of ships when needed, including to combat piracy around Africa and the region. So far, however, U.S. naval personnel have not boarded any Iranian vessels since the Yemen conflict began.

Officials said it’s too soon to speculate on what the Navy ships may do as the Iranian convoy approaches, including whether Iran would consent to a boarding request, and what actions the Navy would take if its request was refused.

Yemen, the Arab world’s poorest country, has been pushed to the brink of collapse by ground fighting and the Saudi-led airstrikes in support of current President Abed Rabbo Mansour Hadi, who was forced to flee to Saudi Arabia. Observers say the fighting in the strategic Mideast nation is taking on the appearance of a proxy war between Iran, the Shiite powerhouse backing the Houthis, and Sunni-dominated Saudi Arabia.