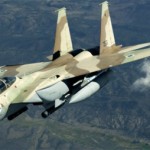 According to an Al-Jazeera report, the Israel Air Force once again targeted Hizbullah objectives in Syria, this time north of Damascus. The reported aerial attack was carried out during the predawn hours Monday, 8 Iyar 5775.

There are deaths and injuries reported in the Monday morning predawn attack but numbers are not released in the report. The IAF is reported to have attacked Syrian and Hizbullah weapons storage facilities in the latest IAF operation in Syria. The IAF reportedly attacked Hizbullah in Syria on Shabbos 6 Iyar and on Friday 5 Iyar as well. Officials in Israel are not commenting on any of the reported attacks.