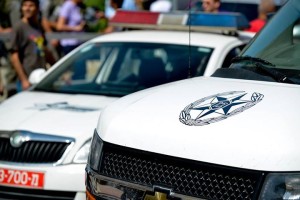 The Arab driver terrorist responsible for the motzei Shabbos vehicular attack in the Beit Orot complex in Yerushalayim is in custody. The terrorist is a resident of the Shuafat refugee camp in the eastern capital.

Four policewomen were injured in the attack, with one, in her 20s reported in moderate condition. The others sustained light injuries. The victims were transported to Shaare Zedek Medical Center in the capital.