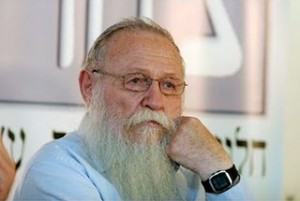 Rabbi Druckman was asked if he is going to engage in shuttle diplomacy between Bennett and Prime Minister Binyamin Netanyahu. He explained that he does not involve himself in political negotiations, stating the responsibility for forming a right-wing coalition is in the hands of “those with the authority to make it happen”, explaining this means the prime minister and not Bennett. Rabbi Druckman explained that if Bayit Yehudi does not enter the coalition the prime minister and not Bennett will be to blame, explaining Mr. Netanyahu already made promises which cannot be broken and has given most of what is available to “other parties”, referring primarily to Shas, which was given control of the Ministry of Religious Services.

Early in the talks Bennett announced that control over the Ministry of Religious Services is a deal breaker, yet the prime minister gave exclusive control to Shas.

Rabbi Druckman explained “Bayit Yehudi was seeking a foothold in the ministry, not exclusive control”, referring to statements by Bennett that he would accept Shas’ minister controlling the ministry for as long as his party can have a deputy minister. However, the prime minister gave it all to Shas.

Do you believe the problem is Bennett or is it the party regarding the apparent disdain in negotiations by the prime minister?

I do not believe the prime minister conducts talks based on personalities. He simply gave it all away already.

What is so wrong with Shas running the ministry? After all, it views things differently, that Bayit Yehudi did considerable damage to state religious services and it simply wishes to ‘correct’ the damage done.

During the years Shas controlled the ministry we saw nothing but destruction, the destruction of the state’s religious services. In addition, a dati leumi rabbi did not have a chance of being appointed anywhere in Israel during Shas tenure.

It is not just a matter of giyur as marriage and everything is of importance.