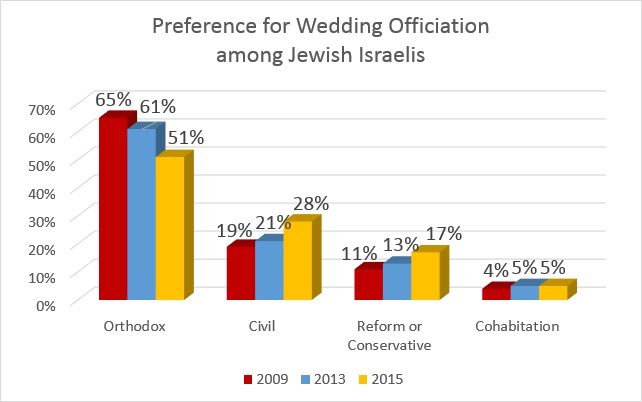 In a poll that was conducted on 15 Iyar 5775, 80% of secular Israeli Jews responded that they would not have had Orthodox weddings if they had been given other alternatives. This is a dramatic increase from 67% during the summer of 2013. Nearly half of the Jewish public (49%) say they would marry outside of the rabbinate, given the option. This is also a significant increase from 39% in 2013 and 35% in 2009. The number of Jewish Israelis who prefer to get married in an Orthodox wedding ceremony reached an unprecedented low of 51%, compared to 61% in 2013 and 65% in 2009.

54% of women prefer a non-Orthodox wedding ceremony, versus 44% of men, citing the non-egalitarian nature of weddings conducted by the Chief Rabbinate.

These dramatic findings should be understood in the face of Israel’s legal reality, which only recognizes the legal validity of Jewish weddings officiated under the auspices of the Chief Rabbinate, to the exclusion of civil and non-Orthodox religious weddings.

The question posed in the poll was: “If you or one of your children wanted to get married, which religious framework would you choose (assuming that all of these options exist and are recognized as equal in the eyes of the law)”. Only 51% of the total sample said they would prefer to have an Orthodox wedding, and of the 49% who preferred an alternative: 28% would prefer a civil marriage, 17% would prefer a Conservative or Reform wedding, and 5% would choose to live together without getting married.

80% of secular Israelis, 54% of the non-chareidi population, and 89% of immigrants from the former Soviet Union would prefer not to get married in an Orthodox framework. Even among traditional Israeli Jews, more than one third (35%) would prefer a non-Orthodox wedding framework. However, 65% of traditional Israelis, 96% of the religious Zionists, and 100% of the chareidi population would prefer an Orthodox wedding ceremony. Preference for non-Orthodox marriages is seen among a majority of those who voted for the Zionist Camp (Labor), Kulanu (which joined Netanyahu’s coalition), Yesh Atid, Israel Beitenu and Meretz. Even among Likud voters 44% preferred non-Orthodox marriages.

Hiddush leader Rabbi Uri Regev states “the survey clearly proves that the number of Israeli couples who desire to break free of the Rabbinate’s shackles is rapidly increasing, parallel to a growing level of disgust with the coalition’s political horse-trading, which comes at the expense of religious freedom and equality in shouldering the civic burden.”

Regev further reflected, “Not only does the Rabbinate’s monopoly not contribute to endearing and strengthening Judaism, it actually increases the public’s alienation from Judaism, which it identifies with religious fanaticism.” He added, “The results clearly indicate that Israeli Jews and world Jewry have much in common, and if Israel fully realized its founding promise for religious freedom, ultimately the majority of Israelis too would embrace pluralism in marriage. This issue has implications not only for Israeli citizens, but also for Diaspora Jewry. If freedom of marriage is not fully recognized in Israel, most of the younger generation of the Diaspora Jewish community would not be allowed to marry in Israel at all, since the Orthodox Chief Rabbinate does not recognize them as Jews or as Jewish enough to be allowed to marry other Jews. If anyone outside of Israel thinks that Israelis accept this religious coercion when it comes to marriage – this survey provides the real perspective.”

These findings were part of a public opinion poll commissioned by Hiddush and conducted by the Rafi Smith Polling Institute for Lag B’Omer. The poll was based on a sample of 500 people, representing the adult Jewish population, with a margin of error of 4.5%. 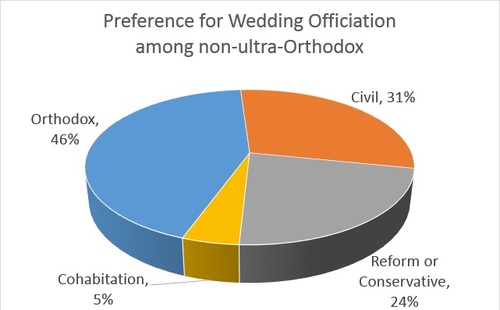 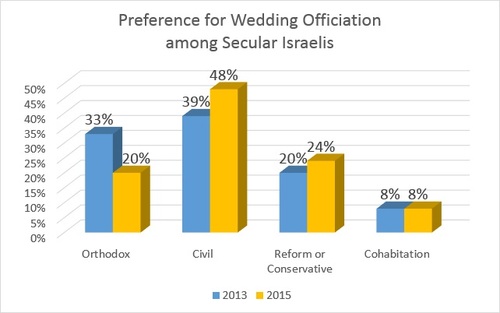