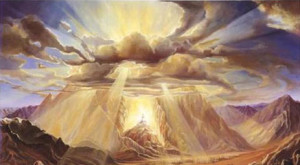 Shavuos is called Z’man Matan Toraseinu. Originally, this event occurred in the Hebrew year 2448 (3327 years ago). As we know, Rav Dessler in his Michtav M’Eliyahu explains that time does not flow as a straight line, but rather as a circle. The day of Shavuos which is the 6th of Sivan is, therefore, the very day that we received the Torah.
Similarly, the Nesivos Shalom explains that just as the Torah is eternal, so too is Kabalas HaTorah eternal. Each and every year there is a new Kabalas HaTorah. In other words, Shavuos is not just a commemoration of our receiving the Torah – it is receiving it once again.

Receiving the Torah is monumental. The entire essence of the nation of Israel is only for Torah (Sefer HaChinuch 273). The entire universe, heavens and earth, were only created for the sake of the Torah (ibid). Receiving the Torah, therefore, requires much preparation. Indeed, the Torah tells us in Parshas Yisro that we needed to prepare for three days – “Heyu nechonim l’shloshes yamim (Shmos 19:15).”

One of the preparations that we make for receiving the Torah is that we learn Pirkei Avos on every Shabbos between Pesach and Shavuos. The Midrash Shmuel explains, “One who will be learning Torah must first know its method of study and how to treat Torah. Therefore, so that the heart of each member of Klal Yisroel will be ready to accept Torah with a complete heart and to properly observe it, they enacted the learning of Pirkei Avos.”

ZENITH OF OUR GROWTH

Let us also recall that Shavuos represents the zenith of our spiritual growth. When we left Mitzrayim we were on the lowest level of Tumah – impurity. In a matter of 49 days we experienced record spiritual growth to the point where the nation of Israel at the time was greatest generation that ever lived.

NO LIMIT TO OUR MITZVOS

We should also be aware that there is no limit to the heights and growth we can accomplish in our ruchniyus – indeed in any Mitzvah. This can be seen from a passage of the Targum Yonasan on Sefer Rus. Boaz tells Rus that he is aware of both how she came and joined up the nation of Israel, and also of all the Chessed that she had performed with her mother-in-law. The Targum Yonasan on this Pasuk explains that because they were written next to each other and said in the same breath, these two Mitzvos were equal to each other.

This is somewhat mind-boggling. Rus was a princess of Moav, a very powerful nation. It is a remarkable notion that one of the top women in society would give it all up to become a lowly member of the Jewish nation that must take Tzedakah. Is this lofty Mitzvah equal to the mere Chessed that she does with her mother-in-law?

The answer, according to Rav Henoch Leibowitz zt”l, is that there is no spiritual limit to any Mitzvah that we perform. If we do a Chessed, any Chessed, with the right intentions and Kavannah – it can be equal to the greatest of Mitzvos.

The Shla HaKadosh explains that Erev Rosh Chodesh Sivan (Monday Before Shavuos this year) is a special time of preparation in terms of Teshuvah, Tefillah and Tzedakah. This may be based upon the Rashi in Parshas Yisro (19:1-2) that the nation of Israel did Teshuvah on this day when they travelled from Refidim.

The Psukim in the Torah give us the pre-history of Matan Torah:
• On Rosh Chodesh Sivan itself Klal Yisroel entered Midbar Sinai, a place wherein Har Sinai is located.
• On the second of Sivan Moshe was told and gave over to Klal Yisroel the two Parshios of “Atem Ra’isem” and “You shall be for Me a nation of priests and a holy nation.” This was when they answered, “Everything that Hashem spoke – we shall do.”
• On the third of Sivan Moshe related to Hashem the words of the nation. Moshe was then told of the Mitzvah of separating.
• On the fourth of Sivan Moshe was told to go to the nation and sanctify them. He then told them to prepare themselves for three days.

The Mechilta (Parshas Yisro) explains that part of the preparations involved the utter unity of the nation – VaYachon Sham Yisroel –b’lev echad k’ish echad – with one heart, like one man. It is clear from this Mechilta that there are levels of Dveikus and holiness that cannot be achieved alone but only through a joint and communal effort. We achieved this level at that time. It was through this unique achdus that we merited to say “Naaseh v’Nishmah – we will do and then we will listen.”
Ultimately Hashem placed the very mountain above them like a barrel. The verse tells us that they stood under the mountain – “vayetzatzvu betachtis hahar” (Shmos 19:17) Rashi explains– “Kafah aleihem har k’gigis.”