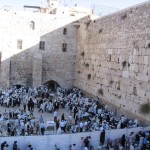 Sunday, 28 Iyar, marks Yom Yerushalayim, the day commemorating the liberation of the Old City of Yerushalayim from Jordanian occupation during the 1967 Six Day War.

Following are some of the traffic arrangements pertaining to the day’s main events; the Flag Parade and the official state ceremony in Ammunition Hill.

Israel Police reports a large force has been assigned to escort the day’s events to maintain order and to keep traffic flowing. Police officials add they will exhibit zero tolerance to anyone and everyone that attempts to disrupt the peace or provoke an incident. It is stressed that this includes verbal attacks as well as physical provocations.

Jerusalem Police Chief Moshe Edri praised Rabbi Chaim Druckman and joined his call to the participants of the Flag Parade to refrain from any provocative actions, both verbal and physical, and to permit the day’s events to pass without incident.

Streets that will be closed from 15:00 to 21:00 including Betzalel, King George, Keren HaYesod, Agron, Yitzchak Kariv, Shlomo HaMelech, King David, Chativat Yerushalayim, Sultan Suleiman, Derech Yericho, Maale HaShalom, Route 1 and (from Zachs Junction to Chativat Yerushalayim Jct.). One may call ‘106’ for additional information. Public transportation will be rerouted to accommodate the day’s events. For additional information one may call *2800.

The official state ceremony at Ammunition Hill will be held from 17:00-20:00.

Rabbi Tzvi Yehuda Kook Street in Kiryat Moshe will be closed to vehicles from 17:00-01:00 to accommodate festivities in Yeshivat Merkaz HaRav.

Roads leading to the tziyun of Shmuel HaNavi will be closed to private vehicles to accommodate the tens of thousands visiting the site during the yahrzeit.

Kever Shmuel HaNavi: Areas closed to private vehicles
Two park-and-rides have been set up to accommodate mispallalim wishing to get to Kever Shmuel HaNavi in Yerushalayim on Sunday, the yahrzeit. One operates from the Ramot bus depot on Mirski Street. The second is the Ofir Camp. Shuttles will bring mispallalim to and from the tziyun. No one will be permitted into the area of the tziyun in a private vehicle.

The special arrangements began on motzei Shabbos and will continue until 19:00 on Monday, 29 Iyar. Route 436 will be closed from Ramot Junction to Har Shmuel Junction. Persons coming from Givat Ze’ev towards Yerushalayim and those arriving from Ramot towards Givat Ze’ev will be rerouted to Route 404.