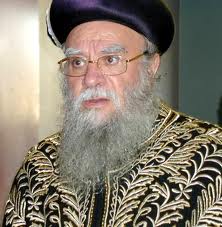 HaGaon HaRav Eliyahu Bakshi-Doron in a brief Tisha B’Av message explains we are in the midst of days of aveilus over the destruction of the Beis Hamikdash. He adds that in Shmona Esrei every day we recite “bonei Yerushalayim” in the present tense and we learn from the Gemara Yerushalmi that in each generation the Beis Hamikdash is not built, it is as if it has been destroyed in that generation.

The rav stresses the aveilus is not a thing of the past but present, and the First Beis HaMikdash was destroyed because of the violation of the three big aveiros while the second was due to sinas chinam. Rav Bakshi-Doron reminds us this is because the Chachamim want us to understand that we are not mourning an event of the past, but present, today.

The rav speaks of the need to focus on ending sinas chinam today, which he laments is eating the nation alive. The rav cites the machlokes between friends, between spouse and between families and the need to bring this to an end.

“We daven to bring the Beis Hamikdash but under present circumstances it doesn’t have a chance of surviving. It would be destroyed”.