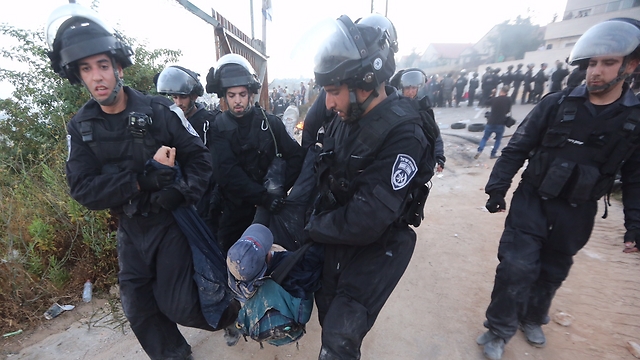 The scene in Beit El on Tuesday evening 12 Menachem Av was a violent one as hundreds of residents and supporters were involved in violent confrontations with police. Residents blocked roads and set trash bins ablaze as police in riot gear moved in with brutality, reminiscent of the violent seen during the expulsion of Jews from Amona near Ofra, just a few kilometers away.

It appears Beit El Mayor Shai Along was hit by police. It appears B”H his injuries are not serious and he does not require medical care. Honenu is reporting a teen has been arrested. There is no additional information regarding that arrest at this time.

Tourism Minister (Likud) Yariv Levin is in Beit El tonight, telling the media he hopes the Supreme Court will accept the government’s position and cancel the ordered destruction of the Beit Dreinoff buildings in the community.