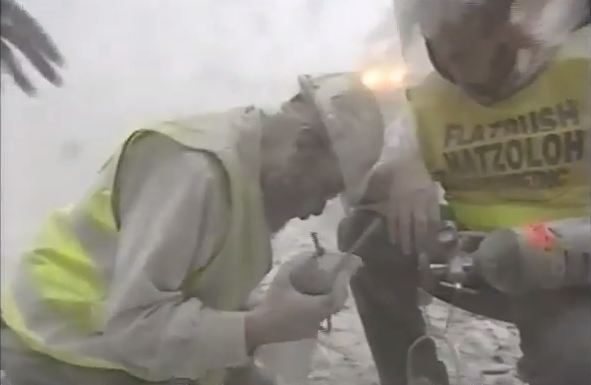 Many Relatives of Sept. 11 victims marked the anniversary of the terror attacks Friday at ground zero with grief, gratitude and appeals to keep the toll front of mind after the passage of 14 years.

Over 1,000 people — fewer than thronged the observance in its early years — gathered for what has become a tradition of tolling bells, moments of silence and the reading of the names of the nearly 3,000 people killed in the terror strikes at the World Trade Center, the Pentagon and a field near Shanksville, Pennsylvania.

Among the heros of 9/11, which included the FDNY, NYPD, PAPD, EMS and other agencies, were the volunteers of Hatzolah.

At the south end of the Twin Towers, Hatzalah was the predominant ambulance service covering the disaster scene. Hatzalah ambulances transported numerous victims, including fire fighters and police officers.

In addition, Hatzalah assisted in the rescue of thousands of men, women and children, who escaped to the docks near the Holocaust Museum in Battery Park and helped evacuate these people onto boats headed for New Jersey . During the day some volunteers were missing, but, thank G-d, there were few casualties amongst the Hatzalah team – miraculously all Hatzalah members survived.