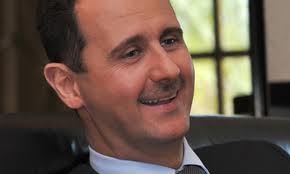 As the United States has turned its attention to defeating the Islamic State group, it has softened its stance on the Syrian leader. More than four years ago, Obama demanded that Assad leave power. Administration officials later said Assad did not have to step down on “Day One” of a political transition. Now, they are going further.

A peace plan agreed to last weekend by 17 nations meeting in Vienna says nothing about Assad’s future, but states that “free and fair elections would be held pursuant to the new constitution within 18 months.” To clarify the timeline, the State Department said this past week that the clock starts once Assad’s representatives and opposition figures begin talks on a constitution. The vote would determine a new parliament, though not necessarily a new president.

Getting to constitutional talks will be difficult. It implies that Syria’s warring parties first reach a cease-fire and establish a transition government — something unattainable so far. Neither Syria’s government nor its fractured opposition has endorsed the strategy yet or done much to advance it.

“Nothing can start before defeating the terrorists who occupy parts of Syria,” Assad recently told Italian state television. Assad considers anyone fighting him, including moderate rebels, to be terrorists.

Obama countered: “I do not foresee a situation in which we can end the civil war in Syria while Assad remains in power. … Even if I said that was OK, I still don’t think it would actually work. You could not get the Syrian people, the majority of them, to agree to that kind of outcome. And you couldn’t get a number of their neighbors to agree to that outcome, as well.”

Syria was the focus for Secretary of State John Kerry, who was heading to the United Arab Emirates on Sunday for talks with government leaders. Many more discussions with Arab officials are planned over the next months.

The uncertainty of the new peace process, particularly as it pertains to Assad, points to Washington’s evolution from early in the civil war, when Obama and other officials boldly stated the Syrian president’s days were “numbered” and sought his immediate departure.

The focus of Washington — and much of the world — has shifted now to IS, whose most recent attack killed at least 130 people in Paris on Nov. 13. As a result, the U.S. is cooperating with Russia and Iran, countries it once tried to ostracize because of their support for Syria.

The hope is peace between Assad’s forces and moderate rebels will allow everyone to work together to defeat IS.

The U.S. and its allies say Assad remains responsible for far more Syrian deaths than IS. His military has used chemical weapons and continues to drop barrel bombs that indiscriminately hit foes and civilians alike.

But for all their brutality, Assad’s forces are not directing attacks in European capitals, beheading American journalists or downing Russian passenger jets. Unlike IS, Assad has powerful patrons in Moscow and Tehran. Russian airstrikes since September have helped stiffen the Syrian government’s defenses, while Iranian forces and proxy Hezbollah militants have added muscle to its ground operations.

The U.S. is trying to take all these considerations into account as it refines a common strategy with partners in Europe and the Arab world that see Syria’s conflict differently. The Europeans are mostly concerned about the refugee crisis across their continent, and they fear more deadly attacks. Saudi Arabia and others backing the rebels want foremost to defeat Iran, which they would see in Assad’s downfall.

The U.S. says both sets of goals are connected. To defeat IS, the president said last month there has “got to be a change a government,” rejecting any approach that returns Syria to the “status quo ante.” The war has killed more than 300,000 people and uprooted some 12 million.

The Nov. 14 statement from the Vienna talks, involving the U.S., Russia, Saudi Arabia, Iran and more than a dozen other governments, avoids the most critical questions to achieve that. It does not outline which opposition groups can negotiate with Assad and which are considered terrorist groups. Assad isn’t even mentioned.

In one way, vagueness is the statement’s strength, allowing Iran and Russia to make common cause in the search for peace. But it may not satisfy everyone’s idea of a “transition.”

By itself, the plan offers no clear path for Assad’s departure, raising the prospect of the embattled Syrian leader still in office when Obama’s presidency ends on Jan. 20, 2017.

Western diplomats described a poker game being played between the U.S. and its own allies. U.S. officials said that while they accept the idea that Assad won’t leave office immediately, the plan for his exit will have to be clarified as part of the diplomatic process.

Saudi Arabia, Qatar and Turkey are being counted on to persuade the Syrian opposition to support the plan, but will only do so if they get a guarantee on Assad. The U.S. and its European partners cannot offer that guarantee, according to the diplomats, who were not authorized to discuss the talks publicly and spoke on condition of anonymity.

If the opposition rejects talking, Assad will not resign as a result. The rebels would not gain sufficient strength to defeat him on the battlefield, and Russia and Iran would not stop supporting him.

Even if the plan is accepted by all and works to the best of expectations, Assad would be appear locked in for a transition process that could extend deep into 2017 or longer.

If after 18 months or two years, IS is defeated and calm is restored, opposition groups would risk reigniting Syria’s conflict by reasserting demands for Assad’s ouster. World and regional powers would face the same quandary.

For these reasons, some Western diplomats have begun talking about the possibility of Assad staying on indefinitely as a ceremonial president, though stripped of his control over the nation’s security and intelligence apparatuses.

It’s unclear whether any of the sides in the fighting would see that as an acceptable compromise.