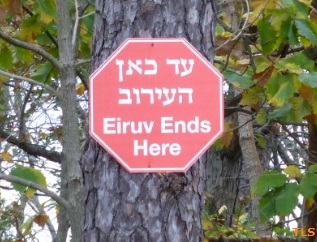 A demolition order has been issued by Arad City Hall for poles that maintain the city’s eruv. This has led to a call from MK Yisrael Eichler in Knesset, submitting an urgent query to Minister of Religious Services (Shas) David Azoulai.

Azoulai explained to Eichler that he looked into the matter, which is now being addressed by the Arad Religious Council, with the latter speaking to Arad City Hall and the mayor. It appears one of the issues is the eruv runs over Route 31 and the head of the religious council, Rabbi Chaim Barduchik, is looking for an alternate route that will be acceptable to the frum community and City Hall. Azoulai added the ministry funds the eruv via the local religious council but regarding the legality of the eruv, this falls under the jurisdiction of the Ministry of the Interior.

Azoulai added he instructed the relevant officials to do just that and to expedite contact Interior Ministry officials to avoid a situation that the eruv is down this Shabbos or next. Azoulai opines that city officials may simply not understand the significance of the eruv to frum Jews on Shabbos.

Minister Yaakov Litzman interrupted, explaining “They know exactly what an eruv is and that is why they are acting as they are, not out of ignorance but malice to ruin Shabbos for the chareidi tzibur in the city”.

The sides quoted various legal precedents in other areas including Jerusalem. Azoulai concluded he will be personally involved in this unfortunate battle in which the city wishes to destroy the eruv.