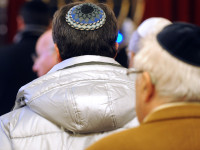 The head of the Jewish community in Marseille, France, Zvi Ammar, announced last week that Jews should avoid wearing the kippa in the streets. The announcement was made last Tuesday a day after a teenager attacked and slightly injured a teacher in the southern France city who wore a yarmulkah.

The teenager, a Turkish citizen of Kurdish origin who was armed with a machete and a knife, said that he had acted in the name of the militant Islamic State group, according to French prosecutors.
“Not wearing the kippa can save lives and nothing is more important,” Ammar told the French paper, La Provence daily. “It really hurts to reach that point but I don’t want anyone to die in Marseille because they have a kippa on their head.”

Marseille has the third largest Jewish community in France.

Ammar added, “On Saturday, for the first time in my life, I will not be wearing the kippa to the synagogue.”

Not everyone, however, is in agreement with this position. France’s Chief Rabbi, Rav Haim Korsia, had urged Jews in France to continue wearing a yarmulkah, and form a “united front.”
Roger Cukierman, the head of the French Jewish Organization umbrella group, stated that not wearing a yarmulkah in public is “a defeatist attitude.”

All this brings up a question. What is the halacha in this regard? What is the source of the obligation to where a Yarmulkah? If the situation has indeed deteriorated to the point of danger, should a Yarmulkah be worn?

The Gemorah in Shabbos 118b it says, “Will you contend with me – who has not walked 4 amos with a bare head?”

Also in Shabbos 156b explains that Rav Nachman Bar Yitzchok’s mother warned to cover his head constantly so that he will have fear of Heaven.

The Gemorah in Kiddushin 31a likewise states Rav Huna the son of Rabbi Yehoshua did not walk four amos with a bare head because he used to say, “The Shechina rests above my head.”

There is a further source found in the Kallah Rabasi (cited in the Sefer HaManhig Chol Siman 45) that states: One who bares his head, there is in this great audacity. The Midrash cites a story where the elders were sitting and two younger boys walked by them. One covered his head and the other revealed his bare head. Rabbi Akivah said about the latter that is both a Mamzer and a Ben Niddah. It turned out that was the case.

Now, aside from this latter Midrashic source, one can perhaps extrapolate from the aforementioned Gemorahs that the general custom for normal average people was not to cover their heads.

POSKIM THAT HOLD IT IS A CHUMRAH

Indeed this is the position of a number of Poskim. The Rambam in Hilchos Dayos (5:6) writes: “Torah scholars conduct themselves with great modesty.. in that they do not bare their heads.” He writes similarly in his Moreh Nevuchim 3:52. The Kol Bo (Siman 11), and the Tashbatz (#547) citing the Maharam MiRottenberg, likewise rule that there is, in fact, no obligation. Rather it is just the custom of Torah scholars on account of cultivating fear of Heaven. The Sefer Chassidim 53 also writes that there is no obligation at all, rather it is a custom of Torah scholars. The Maharshal (Siman 72), Darchei Moshe (2:3), Bach (2), Mogain Avrohom (91:3) and Vilna Gaon (SA OC Siman 2 and 8:6) also hold that it is not obligatory.

How then do the Poskim understand the Midrash with Rabbi Akiva? The Vilna Gaon answers this question based upon the Gemorah in Kiddushin 31a. he writes that the Chutzpah, the audacity that the young man displayed was in specifically baring his head in front of the elders.

POSKIM THAT HOLD IT IS OBLIGATORY

The Pri Magadim Siman 2 writes that halachically it is forbidden to go with a bare head. It is just permitted to do so if part of the head is covered. Rav Shlomo Kluger (HLS Siman 3) rules the same way. The Zohar in Parshas Balak also writes that “a person should not walk four amos with a bare head because the shechina is above the head of man.” The implication of the Zohar is that it is universal for all people.

How then do they understand the Gemorahs that indicate that only these individuals were careful to cover their heads? It is possible that they hold that these individuals had a second covering in addition to the one minimal covering that others had.

WHEN DANGER IS INVOLVED

According to the position of those Poskim who hold that it is not an obligation, there is no question that in a location where there is a significant danger, one may remove one’s Yarmulkah.

Even according to the position that wearing a Yarmulkah is a full-fledged halachic obligation, it is not one of the three sins that one must give up one’s life in order to avoid transgressing. The three sins, of course, are murder, idol-worship and arayos (See Psachim 25a).

Even the Rambam who adds the category of Chillul Hashem as a fourth cardinal sin (See Hilchos Yesodei Torah 5:1-3) only adds it when the persecutor is doing it to specifically undermine Torah. Here this is not the case, one is avoiding wearing the Yarmulkah to avoid danger.

The Midrash Rabbah (See also Yalkut Shimoni Shmos 166) tells us that Moshe Rabbeinu received a Divine punishment by being imprisoned for ten years because he obscured the fact that he was Jewish upon his entry into Midyan prior to his marriage to Tzipporah.

There is no question that we must make every effort to take pride of our Judaism. Yet at the same time, one should not “poke the bear” if doing so would involve risk.
So who is right? It seems that it does depend upon the level of risk and danger. How risk level could and should be assessed is a separate matter altogether.

A DEBATE ABOUT HALACHIC RISK LEVELS

There is a fascinating debate between Rav Moshe Feinstein zt”l in his Igros Moshe (CM I 427:90) and Rav Chaim Ozer Grodzinsky zt”l in his Teshuvos Achiezer (Vol. I #23) as to how halacha views risk levels.

There is a halachic concept based upon a verse in Tehillim (116) known as “shomer p’sa’im Hashem – Hashem watches over fools.” The Talmud (Shabbos 129b, Yevamos 1b) uses this idea to permit certain behaviors that would otherwise be considered dangerous. It is utilized in combination with the idea of “kaivan d’dashu bei rabim – since the masses have already treaded there” we apply the idea of Hashem watches over fools and permit the item under discussion in terms of halacha.

Rav Feinstein seems to interpret this concept as social acceptability – in other words, if the danger is not one that is socially acceptable, then the danger is not halachically permitted, because the verse of “veChai Bahem” comes into play and the person would be in halachic violation of endangering himself. For example, travelling 62 miles an hour in a 55 MPH zone may be silly, foolish, illegal and dangerous, but according to Rav Feinstein’s parameters it would not be a violation if it was socially acceptable. Travelling 90 MPH in a 55 MPH zone is not socially acceptable and would therefore be a full violation of Halacha as well.

According to Rav Chaim Ozer Grodzinsky, the concept of Shomer p’sa’im Hashem was only applied in the Talmud to remote concerns and a situation where there is only a small percentage of a small percentage of danger. It seems to this author that Rav Chaim Ozer is taking into account empirical data in the halachic definition of what constitutes a danger much more so than does Rav Feinstein. Rav Feinstein’s halachic definition is more predicated upon the public perception of the danger.

Applying this debate to Marseilles, we can conclude that when the danger level is low but the public perception of the danger is high, then Rav Feinstein’s view on shomer p’sa’im would be to avoid showing the Yarmulkah, while according to the definition of the Achiezer, the concept of shomer p’sa’im Hashem would apply and one could show the Yarmulkah. If the danger level is higher than the Achiezer would say to remove it.

Of course, there is always the alternative idea of wearing a hat or beret, and thus avoiding the question entirely.

May the shomer Yisroel continue to guard over his nation ad bias goel umashaich, amain.