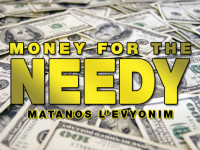 Many schools and Yeshivos are conducting various Tzedakah auctions prior to Purim. The auctions are advertised as a means of fulfilling the Mitzvah of Matanos L’Evyonim. On account of this, we are printing this article a week early.

The mitzvah of Matanos L’Evyonim on Purim is to give at least one gift to two different poor people on Purim day. The plural form of the word “L’Evyonim” teaches us that it must be given to two people.

Even a poor person who himself has reached a financial state that he must ask for charity, must still give.

The Yesod v’shoresh HaAvodah (12:6) recommends that one should recite the following preamble before fulfilling the Mitzvah:

The Mitzvah should not be fulfilled with Maaser money but should be done on its own.

Many Poskim, however, are concerned that giving the minimal amount no longer causes the feeling of Simcha to the poor. When these minimal amounts were calculated the value of silver was significantly higher.

Rav Shmuel Kamenetsky, shlita, thus rules that the minimum amount should be $1. The Shaarei Teshuvah rules that it should be the equivalent amount of the cost of a meal for a poor person. In modern times this amounts to approximately five dollars (Rav Shmuel Fuerst).

The Gedolei HaPoskim (See Mishna Brurah 694:3)tell us that it is preferable to spend more on the Mitzvah of Matanos l’Evyonim than on the Mitzvah of Mishloach Manos. The calculation, of course, includes the food items, the packaging, and the time value of the effort placed into making the Mishloach Manos. For many people, all of this amounts to several hundred dollars. Thus we should give this amount for Matanos l’Evyonim as well.

These gifts should be given in the daytime, after the Megillah is read. Matanos la’evyonim should be above and beyond maaser. Therefore Maaser money should not be used, but it may be added to it.

Some Poskim hold that technically, Matanos la’evyonim may be given before Purim. However, because of the concern that the recipients will spend it earlier, it is preferable to give it on Purim itself. Others write that one should make sure that the funds are only given on Purim itself and that when an intermediary is used it should be held as a package for the poor person and not received on behalf of the poor person.

Money set aside for matanos la’evyonim should not be changed to another tzedakah without a ruling from a posek.

One is not overly strict with the poor on Purim to determine whether they are really poor or not. Whoever puts his hand out — we give him. According to leading poskim, this does not apply to organizations, however.

Children who are dependent on their parents’ table should still give matanos la’evyonim on their own (Aruch HaShulchan 694:2).

Originally, the Mitzvah was to give to a poor person who did not have enough money to have a meal on Purim. Nowadays, such a definition is indeed rare. The Poskim have thus ruled that it may be given to any poor person who is eligible to receive Maaser funds. The Chazon Ish (Trumos UMaasros cited in Balailah Hahu p.12) has written that it may be given to anyone who is not “mesudar beparnasaso” to the extent that he can sustain himself and his family.

Rav Moshe Feinstein, zt”l, ruled that one may fulfill the mitzvah of matanos la’evyonim with a check. This is true even if the check is post-dated. This is also the opinion of Rav Shlomo Zalman Auerbach zt”l (cited in Halichos Shlomo 19:23) and of Rav ELyashiv zt”l, cited in Yismach Moshe (p. 140).

An Onain may give Matanos L’Evyonim in the merit of the Neshama of the deceased, according to Rav Shlomo Zalman Auerbach.

Matanos la’evyonim may be given anonymously. This is the ideal form of fulfilling the mitzvah.