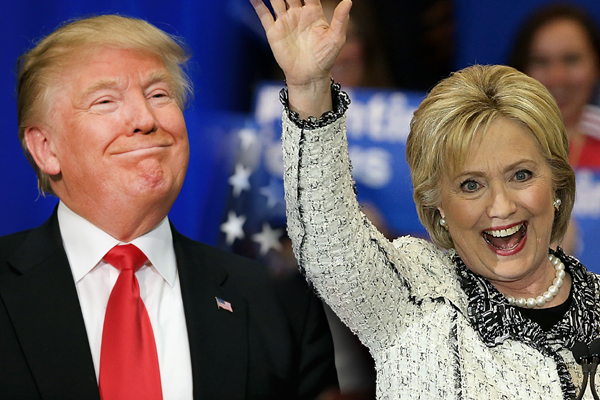 Hillary Clinton and Donald Trump’s preparations to take over the government if they’re elected are now in high gear, and their transition teams are working out of the same building a block from the White House at 1717 Pennsylvania Ave.

It’s the first time in history that two presidential campaigns have worked to set up their governments in miniature literally side-by-side, riding the same elevators to adjacent floors of the tony, marble-floored building as they plan to govern.

Now that Clinton has announced her five-person, day-to-day transition team led by former Interior secretary and Colorado senator Ken Salazar and Trump has decided to anchor his planning in Washington D.C., not New York — a plan under consideration this spring — the campaigns are moving staff into 1717 Pennsylvania Ave.

President-elect Obama’s Washington transition team set up shop above a Subway sandwich shop in 2008. Sen. John McCain, Ariz., the GOP nominee that year, ran his operation out of the campaign’s headquarters in Arlington, Va., and on a shoestring budget of $25,000 to $30,000. He had just six key staff, a relatively small group of volunteers, and part-time advisers around the country.

But today, Clinton and Trump are getting two floors of federally funded office space in the 13-story, modern building owned by developer Tishman Speyer. Computers and technical and administrative support worth millions of dollars are provided by the General Services Administration, part of $13.3 million Congress approved for pre-election transition support.

“They’re both actively building out their teams,” said Max Stier, president and chief executive of the nonpartisan Partnership for Public Service, which months ago set up a presidential transition center with detailed advice for all of the primary candidates. New Jersey Gov. Chris Christie, Trump’s transition chief, regularly holds meetings in the Washington digs, along with Richard Bagger and William Palatucci, who are running day-to day transition operations, Stier said.

Now that he has been formally nominated by the Republican Party, Trump was scheduled to receive his first national security briefing this week, a key part of the transition process that covers foreign policy and national security issues. Clinton is, of course, eligible for the same briefing too.

Transition planning has never been so public or deliberate. As Stier puts it, “This is the first time ever where you’ve got both major parties, non-incumbents, with aggressive pre-election transition planning efforts.”

The change is the result of new laws passed by Congress and signed by President Barack Obama that aim to formalize the process of coming up with potential cabinet picks and top political staff for a new administration, so the new president will have a leg up when he or she takes office in January.

The president-elect will have just 73 days until inauguration to set up a new government, and good-government advocates pressed for years to make the process more disciplined. For starters, an incoming president has to make more than 4,000 political appointments and propose a budget for the $4 trillion federal government within weeks of taking office.

Federal agencies also have stepped up their transition planning, appointing experts to smooth out the handover of power. In the past, agencies gave incoming staffs thick binders of material that overwhelmed them, Stier said. Now it’s being distributed mostly electronically and with information that’s much easier to digest.

“It will be more responsive to things that will be of value to the incoming teams,” he said.