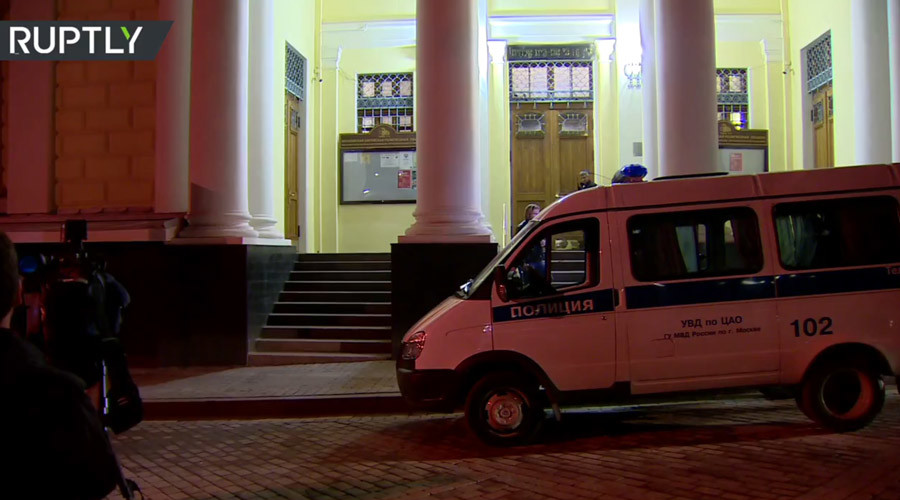 At least one person has sustained gunshot wounds after an armed perpetrator tried to break into a synagogue in central Moscow and threatened to set it on fire, local media reported.

“There was a conflict in one of the religious institutions between the guards and a man, who behaved inadequately,” Interior Ministry spokeswoman Irina Volk said.

“As a result, the person fired several shots at the guards from a non-lethal pistol. After that he was arrested and delivered to a police station,” she added.

The attacker had a gun and a canister of gasoline with him, saying that he was going to burn the Moscow Choral Synagogue, Life.ru reported.

The guard was hospitalized in critical condition after the bullets hit him in the head and chest, Mediazona news outlet reported.

Police identified the attacker as a 40 year-old-resident of the Moscow region town of Korolev. His motives remain unclear. But according to Life.ru, the man has a clinical record and may be mentally unstable.

The incident happened as Davening was ending, Viktor Rakhmilov, the deputy chairman of Moscow’s Community of Mountain Jews, told Life.ru.

The perpetrator had been trying to enter the building for several hours prior to the event, saying that he wanted to see the rabbi, according to Rakhmilov.

After the man shot the security staff member with the traumatic pistol, he reportedly attempted self-immolation, but was taken to the ground by the injured guard.

The security guard was escorted to surgery, “but I don’t think that his injuries were serious. He got his cheek and tongue punctured,” Rakhmilov said.

The head of Russia’s Federation of Jewish Communities, Aleksandr Boroda, has called the attack a “disgusting manifestation of xenophobia,” pointing out the fact that it was attempted on Saturday, a sacred day for Jews.

The Federation of Jewish Communities of Russia has urged Moscow authorities to boost security at synagogues ahead of New Year festivities.

“Unfortunately, this is not the first attack on the country’s main mosque and probably not the last. You’re all aware of the situation with these kinds of attacks around the world nowadays. You’re probably also aware we have holidays ahead – we are not canceling any of the events. We will increase our security together with the police. We are not afraid of anyone,” Aleksandr Kagno, head of Moscow’s Jewish religious community (MERO), told RT.

The Moscow Choral Synagogue is the oldest synagogue in Moscow. According to the synagogue’s website, it’s visited by around 500 people on a daily basis.