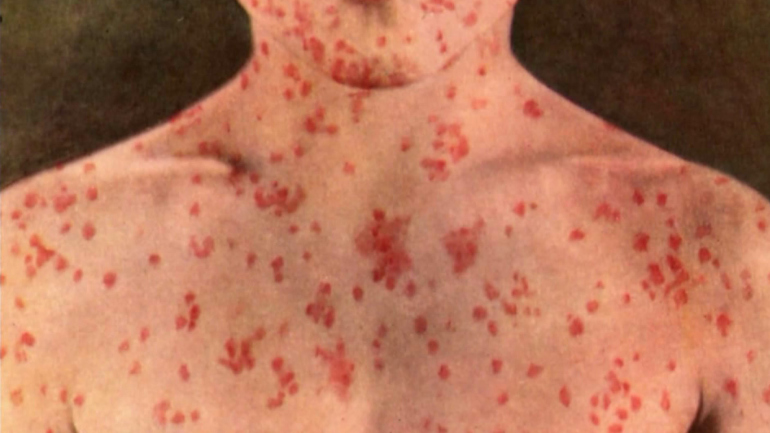 On the first day of Chanukah, Rabbi Hershy Z. Ten, (President of Bikur Cholim in Los Angeles) received a call from the Medical Director for the Los Angeles Department of Public Health Immunization Program advising that just days prior a measles outbreak was identified in the Los Angeles Orthodox Jewish community. Bikur Cholim was asked to assist the Department of Health in alerting the community and schools, as well as once again underscore to parents the threat measles imposes on children and expectant mothers. Rabbi Ten also addressed this issue in his article published in this week’s edition of Jewish Home LA and other media outlets.

Two years ago I wrote and published an article (Jewish Home LA 1/29/15) regarding the alarming resurgence of measles in the Orthodox Jewish community titled, “The Invisible Bullet” in which I used the hypothetical scenario of a 6 year-old child walking into his class waiving a loaded gun at his classmates as his pregnant teacher acts as though nothing is wrong. I likened this child to an invisible bullet, as his lack of vaccinations rendered him an unknown biological threat. My article was prompted by a measles outbreak in December 2014 traced to Disneyland that spread throughout the region; raising serious concerns by parents and lawmakers in how to implement a mechanism to protect children from being placed at risk for contagious deadly diseases including measles, mumps, and rubella.

Months thereafter, Governor Jerry Brown signed into law SB 277 requiring every child entering kindergarten to provide their school proof of immunization or they would not be allowed to attend. This law designated ongoing student vaccination checkpoints at kindergarten and 7th grade, as well as with new student admissions (i.e. transferring to a new school mid-year, etc.). Most importantly, the Personal Beliefs Exemption for religious or any other reasons would no longer apply in California. A sigh of relief could be heard throughout the medical community and schools, as this new law empowered them to prevent non-vaccinated children from enrolling. However, this sense of relief seems to have been premature, as these invisible bullets have reappeared.

This past weekend, on the first day of Chanukah, I received a call from Dr. Franklin Pratt, Medical Director for the Los Angeles Department of Public Health Immunization Program, who advised that just days prior, a measles outbreak was identified in the Los Angeles Orthodox Jewish community linked through epidemiology, social interaction, and geography. He asked that Bikur Cholim urgently readdress and write about this issue in order to reach as many Jewish communities as quickly as possible.

How could this happen? By the year 2000, measles was considered eradicated in the US; however in 2013 – 2014, there were as many as 21% of kindergarten students in some Jewish schools who were not immunized. It is reasonable to conclude that last week’s outbreak was propagated by either non-immunized pre-kindergarten children not yet enrolled, and/or those enrolled prior to 2016. For those children who were enrolled prior to 2016, there were no immunization checkpoints scheduled for them for at least 6 more years; meaning that those unvaccinated children in the school system before this time were still capable of contracting and spreading measles.

Regardless of what or when any regulations were implemented or any parents’ personal belief, no child should be allowed to remain at school or enter a play-group, whether at a home or synagogue, without proof that they’ve been immunized. This year the UC Regents system instituted this policy for all college students enrolled; not due to any legal requirement, but strictly due to their concern for public well-being and protecting their student body and faculty.

A fundamental tenet of the Torah is to lead a healthy lifestyle. For the child who contracts measles, even what appears to be a “mild” case, the chance exists for irreparable brain damage that could develop years later, and in severe cases, it is deadly. When an expectant mother is exposed to measles, her unborn child is at risk of premature birth and death. To reiterate from my first article, the efficacy of these vaccines relies on “herd immunity”; meaning that 97% of the population must be immunized to ensure that an infected person has a limited opportunity to spread disease. This is especially vital to the 1% of the population who experience adverse physical reactions to vaccines, thus cannot be vaccinated. And when the herd immunity is compromised, the most contagious diseases are the first to return. We’ve seen the return of pertussis (whooping cough), mumps, and now measles. To put this danger into perspective, measles carries the distinction of being the world’s most contagious disease. Just one infected child in a crowd can spread measles to every other person present who hasn’t been vaccinated, leading to hospitalization and possible death. Measles can also linger in the environment for up to 2 hours, thereby infecting susceptible people entering that area.

The medical community promotes vaccinations, and anti-vaxxer articles and studies have been recanted and debunked as patently false. However, while we all have freedom of choice, that freedom does not entitle one to endanger the lives of others, especially our children.

The observant community looks to its Rabbinical and educational leaders for guidance, and there are substantial Halachic sources supporting vaccinations which should be championed on behalf of children and our society. The disappointing fact that this latest outbreak is centered in the Jewish community is alarming, and speaks to the need for our leadership to take a proactive role in ensuring the health and safety of our children and families. Rabbis, school administrators, and physicians need to establish policies that go beyond legislation to ensure that no unvaccinated children are allowed to attend school or synagogue; and if a child is identified as non-immunized, they should be immediately sent home until they have proof of vaccination.

If you suspect your child may have been exposed to or is symptomatic of measles, (i.e. fever, rash, cough, watery/itchy eyes, runny nose) or any other highly communicable diseases, please immediately call your pediatrician’s office to discuss how best to proceed. Most importantly, limit your child’s exposure to others, including visits to ERs and urgent care centers until you have received medical advice.

With the serious threat of measles returning to our doorstep, I am hopeful that our leadership will continue their efforts to protect and safeguard our children and the public at large.