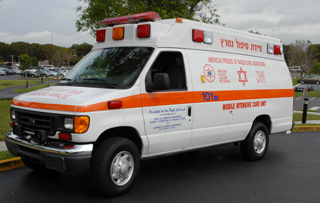 Rosh Yeshivas Slobodka HaGaon HaRav Dov Landau Shlita was injured on Thursday morning 29 Kislev as he was heading out from shachris. It appears he struck a bench and fell to the ground, injuring his head. Talmidim acted immediately to assist him and simultaneously phone Hatzalah.

The rosh yeshiva asked to have his tefilin brought to him before permitting EMS personnel treat him. They tried to persuade the rav to permit the responders to treat him but he insisted on seeing his tefilin, which he then began re-blacking. It appears he was concerned the tefilin were scraped during the fall.

Only after completing the blackening of his tefilin did the rosh yeshiva permit the medical personnel to tend to his head injuries, which B”H are not reported to be serious.