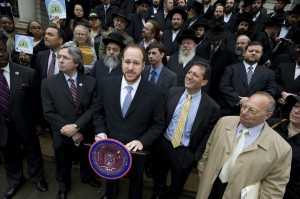 “It is our job to protect this city’s most vulnerable, and no one is more vulnerable than our children,” said Councilman Greenfield. “That is why we are demanding that our children not bear the disproportionate brunt of budget cuts. In a sixty-four billion dollar budget, we must find a way to restore twenty-four million dollars to ensure that our must vulnerable children can continue to receive childcare.”

Most devastating are the elimination of Priority 7 childcare vouchers and the closure of 16 ACS-operated daycare centers, which will disproportionally impact Brooklyn residents. Of the 16 centers slated for closure citywide, 10 centers are in Brooklyn and the majority of the over 1,000 families receiving priority 7 vouchers reside in Brooklyn.  Priority 7 vouchers are generally given to families who are below the poverty level (making less than $22,000 a year for a family of four) and are in special need of child care.

“Cuts to daycares and Priority 7 vouchers hurt families, and make parents choose between working to pay for family expenses and their children,” said Councilmember Fidler.

“Mayor Bloomberg’s budget unfairly punishes Brooklyn kids — with harsh and disproportionate cuts that would eliminate Priority 7 vouchers and shutter day care centers that families rely on,” said Councilmember Lander.  “Brooklyn families — from Borough Park to Bedford-Stuyvesant — are being asked to shoulder too much of the burden of tough economic times.  We are calling on Mayor Bloomberg to restore these critical programs.”

Priority 7 vouchers are used by struggling families to pay for day care and after-school programs for their children.  If Priority 7 is eliminated, these children will have nowhere to go. Similarly, the elimination of day care centers would displace hundreds of children.

“Priority 7 vouchers are essential for my community,” said Councilmember Levin.  “I have long been an advocate for public childcare services and I will continue to fight with my fellow Councilmembers to prevent the devastating cuts we face. Brooklyn stands to lose a disproportionate amount of ACS centers and voucher relief, and we will continue to demand these crucial services be provided to our community.”

“It is reprehensible for the Administration to cut childcare funding, which provides crucial assistance to numerous families in Brooklyn, and throughout the five boroughs.  The care of children, and help for parents should be our number one priority to ensure the best future of this City,” said Councilmember James.  “I am certain there is room to work with lease-holders of these daycare centers to bring down costs; as they also realize that the elimination of funding for childcare will displace hundreds of children.  Therefore, it’s imperative that other alternatives be considered, right now.”