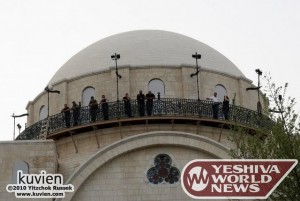 When the Churva Shul in Jerusalem’s Old City was being rededicated in March of this year, there was a bit of a political storm from the PA (Palestinian Authority), accusing Israel of trying to undermine the status quo in the Old City.

Now that the ancient shul is operating, restored to its former glory, a storm of a different nature is underway, from the Israel Center of Pluralism, i.e. Reform Jewry, and others, who insist the shul has been taken over by chareidim.

Israel Radio’s Reshet Bet reported on Thursday that there are complaints that women not meeting modesty requirement are not permitted in and at least one tourist group seeking to enter the newly-renovated shul was delayed for the same reason.

The Rova Development Company and Keren Moreshet HaKotel are responsible for the running and maintaining the shul, both being quasi public organizations. The state has categorized the shul a national heritage site, prompting the complaints, explaining that in addition to being a shul, it is a tourist site.

Jerusalem Councilwoman Rachel Azarya feels that the shul which was established hundreds of years ago and represents the battle over the Old City has become the sole property of chareidim, and all others are no longer entitled to benefit from this treasure. “Today there are people sitting there learning Torah, which is a good thing, but the tens of millions of shekels were invested to permit visits and tours”. Groups can come in, by making advanced reservations, and one must pay NIS 25 per person, and one may not see the main hall since people are learning there. She stressed that she too is shomer shabbat, and does not oppose learning, but she opposes the “chareidi take-over”. This is the first and only shul in the Old City charging money for visitors, and they are not even permitted to see the main hall of the shul.

Rabbi Shmuel Rabinowitz, rav of the Kosel and Holy Sites feels that once again, the picture is being distorted. “I am compelled to explain that I do not agree with the facts as they are being presented”.

Israel Radio: what is the situation today?

RR: There is a situation permitting learning as well as permitting visitors and tourists to enter and see the structure. “If politically motivated individuals who seek to destroy Yerushalayim fabricate facts this is the result. There is a limit to everything. If you wish to hear facts, here they are.

“The shul is open to anyone and everyone, including non-Jews, as is the case with other tourist sites in the Old City, and the tour is not five minutes, but 45 minutes so the fee is nothing more than symbolic”.

In short, the rabbi explains one is “not visiting a museum, but an active shul. The complaints are simply another effort to bring politics into the running of holy sites, something that did not occur in the past.” He blames those with a “different agenda and picture as to the future of Yerushalayim and the Old City” as being responsible.

The rabbi added he simply cannot understand how a religious person is capable of airing such accusations when s/he is well aware they are baseless.