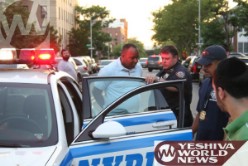 Two state lawmakers kicked off a legislative attack on the NYPD’s controversial stop-and-frisk policy on Sunday and compared it to Arizona’s new immigration law.

Assemblyman Hakeem Jeffries and state Sen. Eric Adams plan to introduce bills in Albany Monday to ban the NYPD’s practice of saving personal data of people who are stopped and questioned but not charged with a crime or issued a violation.

“Since the NYPD will not end this practice, the state Legislature must step in to protect the people,” Jeffries said at a City Hall press conference.

The bills are the first legislative challenge to the stop-and-frisk database compiled by the NYPD, which stopped and questioned people in record numbers last year.

The NYPD maintains the confidential database has proven helpful to detectives in solving crimes.

Joined yesterday by civil libertarians and other lawmakers, Jeffries and Adams, both Brooklyn Democrats, argued that the NYPD is stopping and questioning blacks and Latinos in disproportionate numbers.

Saving the information of those who are innocent is a civil rights violation, they said, and appears similar in spirit to the controversial Arizona law, which allows cops to demand immigration papers from any citizen deemed suspicious.

“We are not the northern Arizona,” Adams said.

The NYPD said it does not stop and question people based on census data, but instead focuses its efforts in crime-plagued neighborhoods.