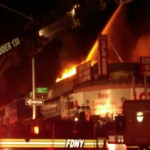 9:43PM EST: Rego Park, Queens – The FDNY is battling a massive 4-alarm fire at 66th Road and 99th Street. Heavy flames are blowing through the roof of the structure, and is spreading to the adjacent structure – which is the Ohr Natan (Bucharian) Shul.

The FDNY is currently removing the Sifrei Torah, as hundreds of firefighters battle this fire, which has spread to at least 4 stores.

Dozens of people are standing in front of the shul saying Tehilim.

Queens Hatzolah units are on the scene standing-by if needed.

Watch 3:23 as the Shul Gabbai gets interviewed, and the video goes inside the Shul.