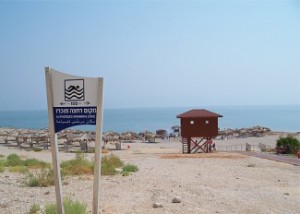 The beach is opening a number of days ahead of schedule in compliance with a request from Bnei Brak Mayor Yaakov Asher, who wished to permit swimmers to enjoy before the start of the Three Weeks.  There will be no fee charged. The beach will be free to all.

The Herzliya Municipality will be taking part in the expense, in compliance with the law compelling a city to offer a mehadrin beach for its religious residents. In this case, the cooperation between the municipalities has facilitated the reality and frum swimmers in this case will be permitted to enjoy one of the area’s cleaner beaches.

Bnei Brak City Hall officials requested that Sundays, Tuesdays and Thursdays be allocated for women, and Mondays, Wednesdays and Fridays for men. The request was accepted. Dan Bus Company will provide transportation, and arrangements are being finalized, including acceptable barriers to protect the modest of swimmers and new access areas to the beach.