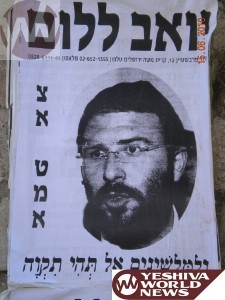 12:22PM IL: The Tuesday morning court proceedings surrounding the Emanuel Beis Yaakov was surrounded by tensions of the recent months, in which the sides have failed to reach agreement. Yoav Lalum has been villainized by the Ashkenazi chareidi community, with pashkavilim bearing his photo appearing in chareidi areas, labeled as a “traitor’ and worse.

In today’s hearing, High Court Justice Edmond Levy, who was lauded for his remarks just yesterday as he supported the right of chareidim to sit and study Torah and have the state subsidize the learning showed a different attitude today, one of contempt for Chinuch Atzmai and the rabbonim for having the chutzpa to ignore a High Court ruling.

Levy stated that a ruling of the nation’s highest court is not subject to anyone’s approval, or any halachic authority, and failure to comply with the court’s earlier rulings is indeed a serious matter.

In the session today the pressure was on the Slonimer Rebbe Shlita, who told the court he refuses to accept any compromise suggested, for there can be no compromise regarding the chinuch of the children. The court requested that Beis Yaakov Emanuel permit the Sephardi girls to enter the mainstream program for the next two weeks, the remainder of the school year, stipulating that by doing so the school in no way implies any acceptance regarding next year, but the Rebbe remained firm and stated he cannot accept such a compromise.

One parent whose child attends the Beis Yaakov is Mr. Yitzchak Green, who agreed to speak with the media. “We want to live our lives. We are not for or against them [the Sephardi girls]. How can we have two schools in one building? If one sends his children to Bnei Brak is this discrimination too? You want us to go to jail, we will go to jail. You want to kill us, kill us.

“This is our life that we toiled to build and no one will destroy it, not anyone. We will protect our values to the end and the honorable Edmond Levy or Dorit Beinish will not change this, not even the [retired High Court president] honorable Aaron Barak of the past.

There will be a protest of 500,000 people or not. It doesn’t matter. There is no power in the world to today that will compel us to compromise. This is the ultimate battle and we will not give in”.

Yehuda Laufer, a Jerusalem resident who grandchildren attend the Emanuel Beis Yaakov added “It is good that the High Court showed its true face, the number one enemy of religious and Torah life in the State of Israel… The court is the neighborhood bully. No one elected it or selected it. It is not a democratic body. At the end of the day, it is a leftist entity that continues to battle Torah and halacha life and it is good that we now all know exactly who we are dealing with.”

Emanuel Municipality official Yehuda Eichler added “We will uproot our homes in Emanuel to adhere to the word of our rabbonim. It is comes down to listening to our rabbonim of the court, we will adhere to the rabbonim. The Torah was given over 3,000 years ago and the court I don’t know exactly. What is certain that I will do exactly as the Slonimer Rebbe instructs me – it’s that simple. Despite living in Emanuel for 25 years, and my father was a rav, and I am well-entrenched in the community, my wife and I will leave and relocate. No one will compel us regarding the chinuch of our children.

Deputy Minister R’ Meir Porush told the media this battle targets the heart of chareidi Jewry, the chinuch of the children. He added that the entire matter of taking the dispute outside the camp was an error, and he remains hopeful that the honorable High Court will realize this, and to return it to the chareidi community to address, and not chas v’sholom to further fuel the fires of dispute.

“We all know there are disputes, some very serious, and there exists a chareidi community, religious community and secularists. That there is an internal problem is nothing new but to take it out in public is not going to lead to a solution and it will not add any honor to the chareidi community”.

Porush took great care to weigh each word, not in any way undermining the legitimacy and stature of the court, but added that even in the early days of the establishment of the state, Ben-Gurion understood the differences and agreed that each group must educate one’s children as one see fit.

Porush stresses that he wishes to remain in Eretz Yisrael, where his family has lived for generations, but please, “permit me to conduct my life” and “I hope this will end in an honorable way somehow”.

ISRAEL RADIO: Are they part of the state or not?

A recess was ordered to permit the sides to return to order, but that too did not help and another recess was called as the turmoil continued, with tempers flaring and the court becoming visibly impatient. Education Ministry officials spoke with parents during the recess, hoping to find a common ground. At one point a parent representative spoke to Justice Levy, explaining that Gedolei Torah Shlita will find an acceptable compromise, only serving to further anger the court since Levy already feels the chareidi community is simply in contempt, unwilling to adhere to the dictates of the nation’s highest court.

Finally, Justice Levy announced the session would adjourn and the court will announce its verdict soon. The tzibur began by shouting the entire posuk of Shema Yisrael, followed by Utzu Eitza as the justices left the courtroom. The tzibur then shouted “Hashem Hu Elok-im” and the justices simply left the chamber.

It is blatantly clear that the parents are indeed willing to go to jail, unwilling to compromise what they see is a cardinal issue for Beis Yaakov Emanuel and the entire Chinuch Atzmai system. The Slonimer Rebbe Shlita appears ready and willing to be the first to enter a jail cell chas v’sholom should this be the next step in the ongoing battle between Beis Yaakov Emanuel and Yoav Lalum.

Lalum was surrounded by security officials to prevent any physical confrontation between him, parents and others present in the courthouse.