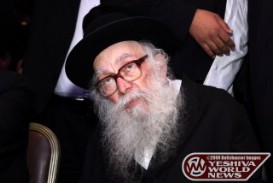 The High Court of Justice is calling on the Interior Ministry to explain just why it remains unwilling to accept the giyur of the Bnei Brak Beis Din of HaGaon HaRav Nissim Karelitz Shlita, in the case brought by attorney Theodor Schwartzberg involving a giyoress from the Czech Republic, as was reported by YWN-ISRAEL earlier.

The court on Wednesday, headed by Chief Justice Dorit Beinish, issued a show-cause order, instructing the State of Israel and the Ministry of the Interior to respond within 90 days why this woman is not being recognized as a Jew, and granted citizenship as permission to reside in Israel as is being requested.

Martina Regchuba has been fighting the ministry for four years, with the ministry maintaining that she is no longer chareidi, but only modern dati, and therefore it does not recognize the validity of Rav Karelitz’s beis din’s decision.

Without citizenship, she is not entitled to many benefits including healthcare, and she will become an illegal alien and ousted by immigration officials.