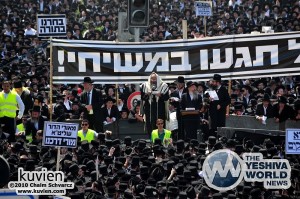 The Emanuel Beis Yaakov case may have bought a bit of tranquility inside the divided Chinuch Atzmai operation, and with the Emanuel affair behind us, at least for the time being, Chinuch Atzmai officials are preparing for their day in court on Sunday, July 4th, as the sides continue efforts to take control of the organization. Perhaps the sides should have attended the ahavas yisrael seminars held in Emanuel during the past days.

Kol HaChareidi reports that the in-fighting which has plagued Chinuch Atzmai directly impacted the Emanuel case, inhibiting efforts to reach a settlement since the leaders of the organization are not cooperating with one another. It is no secret that the power struggle to determine who will control Chinuch Atzmai has been going on for some time, and the court will have to decide a number of key issues; including if Rabbi Avraham Yosef Lazerson can by a member of the directorate and if the Moetzas Gedolei HaTorah’s decision regarding the makeup of the directorate will be accepted and be legally binding.

Efforts to reach an agreement are ongoing as the sides would prefer to avoid having the secular court once again adjudicate a major controversy that is critical to the chareidi community. Critics point out that Chinuch Atzmai has been plagued with infighting for too long, and it has taken its toll on the system and the schools as well.