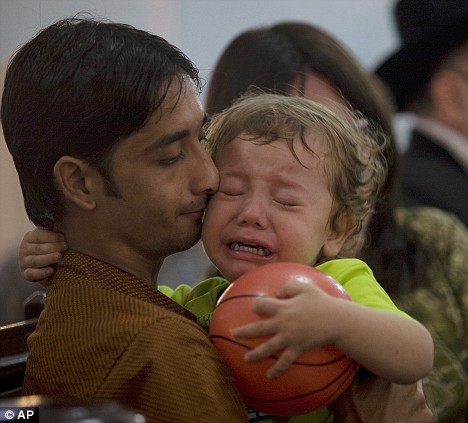 “This is a humanitarian move necessary for anyone who saves a Jewish life,” Yishai said Sunday.

The citizenship process began with an appeal by the Holtzbergs to the Interior Ministry. The extended family of Gavriel Holtzberg, who was murdered along with wife Rivka in the attack on the Chabad center in which they worked, asked that Samuel be allowed to remain in Israel in order to continue caring for Moshe.

Immediately upon her arrival in Israel a year and a half ago Samuel received a work permit, and sources say she will be granted full-fledged citizenship within a year.

“She risked her life in order to save Jews and we are obligated to take care of her,” the interior minister said. “The family has impressed upon me that she is vital to the continuing rehabilitation process, following the terrible disaster they have undergone.”

In an interview with CNN just days after the attack, Samuel recounted the harrowing rescue. “First thing is that a baby is very important for me and this baby is something very precious to me and that’s what made me just not think anything, just pick up the baby and run,” she said.

“When I hear gunshot, it’s not one or 20. It’s like a hundred gunshots,” she added. “Even I’m a mother of two children so I just pick up the baby and run. Does anyone think of dying at the moment when there’s a small, precious baby?”

Samuel said Moshe continued to ask about his mother, and that she wanted to stay in Israel for as long as he needed her.