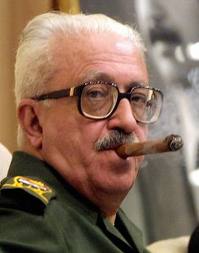 While the Catholic Church holds that the death penalty is wrong in nearly all cases, that doesn’t mean the Vatican speaks out publicly in every situation where an execution is scheduled.

So that raises the question why the Vatican spokesman, Fr. Federico Lombardi, asked today that Iraq not carry out the death sentence on former Iraqi Foreign Minister Tariq Aziz.

Although the Vatican has often worked through diplomatic channels to try to save the lives of those on death row – and Pope John Paul did manage to get clemency for a Missouri man once – in this case the impression certainly is that Aziz has gotten Vatican attention because he’s a Christian (and was the only one in Saddam Hussein’s cabinet).

“It looks like the Italians in the Vatican are up to their old tricks,” said one former Vatican official, noting both the Italian fixation with the death penalty, and Tariq Aziz’s close relationship with some Italian Franciscan priests.

Lombardi’s statement did not mention that Aziz was a Christian, but said not executing him would be a way to helping Iraq towards peace and reconciliation.

While the Catechism of the Catholic Church published under Pope John Paul was very clear in saying the death penalty was wrong in virtually all cases, some conservative Catholics argued that Saddam Hussein’s unique situation might have proved an exception to that teaching.