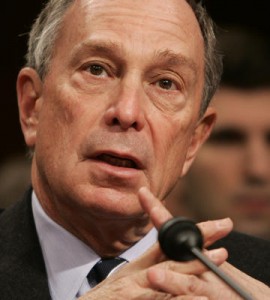 Mayor Bloomberg declared yesterday that “it’s not terribly important” what Assembly Speaker Sheldon Silver or anyone else thinks about a millionaires tax, since Gov. Cuomo has flatly ruled it DOA.

“I think at this point, the governor has made a commitment that there would not be any tax increases,” Bloomberg said. “So I don’t know [that] it’s terribly important what the rest of us think. The governor is going to do this, and I will support him in that.”

The mayor opposes new taxes, and his comments were a slap at Silver, who’s trying to muster support for a pared-down version of the state income-tax surcharge on the wealthy that expires on Dec. 31.

Facing significant opposition, Silver has proposed extending the tax for just a year and lifting the minimum threshold to $1 million, up from the current $200,000.

The speaker’s proposal could pass the Assembly as soon as today, as leaders in both legislative chambers plan to advance their one-house budget plans.

Approval of wish-list spending plans from the Republican-controlled Senate and the Democrat-controlled Assembly are intended to force each house to publicly stake out its negotiating position in advance of the state’s oft-ignored April 1 budget deadline.

The Assembly plan would spend $419 million more than the $132.5 billion budget proposed by Cuomo last month. The millionaires tax proposed by Silver would generate $706 million.

Silver would use much of the proceeds to restore $200 million of the $1.5 billion Cuomo wants to cut from school aid. The rest would pay for a litany of social services and senior-citizen programs long championed by the Assembly’s Democratic majority.

The largest chunk would flow to the city, where Bloomberg is threatening to lay off 4,666 teachers and close more than 100 senior centers.

But even under that scenario, Bloomberg held fast to his position against a tax hike right now. “You want to drive businesses out, you raise taxes,” he warned.

Silver’s legislation would preserve much of Cuomo’s plan to cut $2.3 billion from Medicaid but would strip out a key component of the plan that would cap at $250,000 pain-and-suffering awards in medical-malpractice cases.

The Senate’s budget proposal would restore $263 million for school aid and scale back Cuomo’s proposed $2.3 billion in Medicaid savings by $150 million.