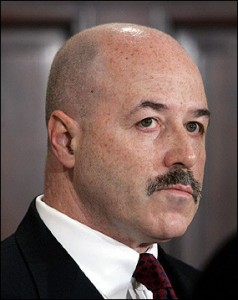 An appeals court this morning upheld crooked ex-Police Commissioner Bernard Kerik’s extra-harsh sentence for lying to the White House and cheating on his taxes.

The U.S. Second Circuit Court of Appeals in Manhattan rejected the former top cop’s claim that the judge who slapped him with a four-year prison stretch “took personal offense” at his criticism of prosecutors.

“To be sure, the district court noted the irony in Kerik (or his supporters) leveling baseless accusations of corruption against the prosecutors when it was he who had ‘used his (official) position for his own personal gain,'” the ruling says.

“But the judge hardly needed a prosecutorial background to be struck by this incongruity.”

The 10-page decision also found no “apparent bias” in former White Plains Judge Stephen Robinson’s remark “that Kerik’s use of the Sept. 11 tragedy ‘for personal gain and aggrandizement is a dark place in his soul.'”

“The observation finds support in Kerik’s efforts to take $80,000 in revenue deductions for false charitable contributions in connection with speeches made about Sept. 11,” according to the unsigned order by Judges Joseph McLaughlin, Guido Calabresi and Reena Raggi.

“It’s a real disappointment, but we’re not going to give up. We’re evaluating next steps,” said Kerik’s lawyer, Andrew Schapiro.

Robinson — now a partner at white-shoe law firm Skadden, Arps — cited the “operatic proportions” of Kerik’s crimes in adding more than a year to the maximum 33-months sentence called for in his plea agreement.

The 55-year-old fallen hero, currently locked up in a medium-security prison in Maryland, isn’t set for release until October 2013.