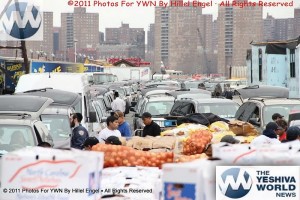 [LARGE PHOTO ALBUM IN EXTENDED ARTICLE] Hundreds of cars, and thousands of people lined up for Passover food at the Brooklyn Navy Yard in Williamsburg on Sunday.  The crowds of people, stretching over a mile, received thousands of pounds of Kosher-for-Passover food in an effort to help the needy observe the upcoming holiday according to tradition. The event, sponsored by the United Jewish Organizations of Williamsburg and the Metropolitan Council on Jewish Poverty saw those in need receive meats, vegetables, fruits, and other items for the festive holiday.

For families in need, Passover, which commences in just over a week, is one of the most difficult times of the year and is largely overlooked. The large crowds in Williamsburg represented those who sometimes must forgo the necessities of their traditions due to financial concerns.

The holiday demands special Kosher for Passover foods which must be purchased, often times at great cost.  Many poorer Jewish families in Williamsburg, most of whom have large households, are unable to properly observe a festive and joyous holiday without the UJO-Met Council Passover food distribution event.

Dignitaries and elected officials from Brooklyn and New York state were on hand to assist in the effort. NYS Comptroller Thomas DiNapoli joined NYC Councilmembers Letitia James and Steve Levin and Assemblymember Joseph Lentol at the event. These officials saw the difficulties the needy families face and assisted with the distribution effort.

The very well-coordinated event was made possible by the forethought and efforts of the organizing institutions as well as volunteers from the  Williamsburg Shomrim Patrol (WSPU).

“During this celebratory time of year, we cannot allow any family to be without the necessities of their traditions,” said Rabbi David Niederman, Executive Director of the UJO. “Thousands of families are in need and struggle to make ends meet every day. With the help of the Met Council, we were able to make an important contribution and have a significant impact on the observances and well-being of a great many people.”

Passover starts on April 18 when Jews will commemorate the liberation of their people. Thanks to this large and successful event, many thousands more in Brooklyn will celebrate and be free of strife for the exodus holiday.