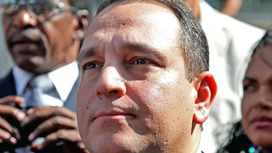 A New York lawmaker expelled from the state Senate after a domestic incident is now serving up pizza in his former district.

Hiram Monserrate is working at Papaya Pizza in Corona, Queens.

The former politician told The New York Post he was “consulting and assisting in the management” of the new restaurant.

The Post said the business was registered with the Department of State last November. The address on the paperwork is that of Monserrate’s mother’s home in Queens.

Monserrate was expelled from the Senate after his conviction on misdemeanor reckless assault.

Some peeved community residents said they have no intention of buying a slice at Monserrate’s counter.

“We’d never buy anything [there]. I would never give him a dime,” a teacher at a nearby school told the Post. “I would never want to put a dollar in his pocket.”

Although he confessed he enjoys sampling the food at his pizzeria joint, Monserrate made sure to remind the Post, “I still love politics.”