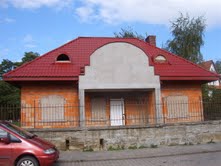 Visitors to the Polish town of Sanz (Nowy Sacz) will soon be able to access a new building currently being constructed just outside the Pre-War Beis HaChaim and enjoy refreshments, have a place to sit & rest, daven a tefilloh or even learn, before entering the famous Pre-War Beis HaChaim where the Ohel of the Divrei Chaim Rabbi Chaim Halberstam (1793–1876) is situated.

Hundreds of visitors come to this Beis HaChaim each year, many on the Divrei Chaim’s Yartzheit, which falls immediately after Pesach on 25 Nissan.

Hachnossas Orchim Sanz has in recent weeks received a Psak HaRabbonim signed by six Rabbonim under the leadership of Rabbi Elyokum Schlesinger Shlita who heads the Committee for the Preservation of Jewish Cemeteries in Europe, encouraging the Askonim involved in this building project, to complete the building project initiated by Mr Yakov Miller O’H of Sanz and make it available to the consistent stream of visitors arriving at this well-known Beis HaChaim.

The Vaad HaRabbonim, had convened to investigate all the latest evidence and maps of the area and issued their Psak, permitting the building to be completed and to be put to the immediate use of visitors to the Beis HaChaim in Sanz, which is situated approximately 100 Kilometers South East of Krakow.

Anybody interested in involving themselves in the completion and running of this building project should contact Hachnossas Orchim Sanz in writing C/O 49 Bridge Lane, London NW11 0ED, England.