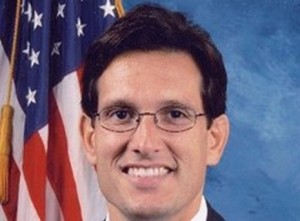 Cantor responded immediately when asked Monday whether Ryan, a rising GOP star and the author of the party’s budget, should run for the White House in 2012.

“Sure,” Cantor said. “Paul’s about real leadership. I think that that’s what this public so desperately wants to do right now. They don’t want to see individuals that just dismiss problems that we can just sweep under the rug.”

Ryan, who chairs the House Budget Committee, has been the subject of presidential speculation as other prominent Republicans have bowed out of the 2012 race. Indiana Gov. Mitch Daniels announced on Sunday he was passing on the race, a week after former Arkansas Gov. Mike Huckabee said he would stay on the sidelines.

In an appearance Sunday on CBS’s “Face the Nation,” Ryan repeatedly said he was not running, although he did not rule out a future bid.

While Cantor said the current crop of contenders included “strong candidates,” he made clear that he wanted them to support the Ryan budget, which has become a political lightning rod, as Democrats seek to play up a proposed overhaul of Medicare that is unpopular in public polls.