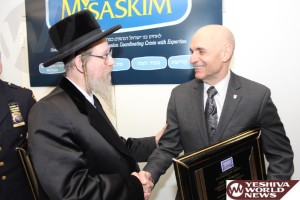 This week marked an unusual range of activities at Misaskim’s headquarters. In addition to the more than 35 families that were being serviced as part of the organization’s daily operations, Misaskim was involved in several other situations.

Thursday, April 11th – Misaskim representatives were invited to the New York Medical Examiner’s office to make a presentation that would enable Medical Examiner borough chiefs and their emergency planning staff to understand the Jewish traditions that are related to death.

The objective of this presentation was to explain the need for Misaskim’s services and indicate how they are delivered to the Jewish community. The topics discussed included:

How Misaskim assists families to ensure kavod hameis should they have to deal with the Medical Examiner’s office.
How Misaskim handles a meis mitzvah, and the importance of addressing such a situation properly
How Misaskim operates as a support system for other chevra kadishas should they need technical assistance
How Misaskim’s Disaster/Recovery team operates, and how their actions prevent nivul hameis
Misaskim’s preparedness plans in the event of a large scale disaster R”L

Misaskim representatives stressed the organization’s determination to adhere to legal requirements, while at the same time working to help families fulfill their religious obligations at the time of a death. Misaskim continues to enhance its 30- year working relationship with the ME’s office in order to better serve the needs of both the Jewish community and the Medical Examiner’s office. This relationship serves as a role model for medical examiners and coroners across the nation.

Assistant Commissioner for the Medical Examiner, Frank DePaolo, thanked Misaskim for the “excellent presentation.” He said, “Our staff learned much about the Misaskim organization that will result in greatly improved relations going forward.”

Sunday, April 14th – Misaskim welcomed a very special, new Sefer Torah that is already being used by grieving families in our communities. This Sefer Torah was donated in memory of Mr. William Solomon A”H, who immigrated to the United States from Poland in 1914 with 4 older siblings. Mr. Solomon’s commitment to Judaism remained strong throughout his life.

Unfortunately, Mr. Solomon never married. Even though he was alone, he is fondly remembered by his family, friends, and members of the community as “an enormous bundle of warmth, love, fun, and humor. He loved people, and people loved him.”

On Sunday, his family and friends came to Misaskim to commemorate the memory of their dear friend. They participated in the siyum kesivas osios and a seudas mitzvah. They danced with the new Sefer Torah, and remembered Mr. Solomon’s kind deeds.

Mr. Solomon spent most of his earnings supporting a variety of worthy Jewish mosdos and causes. After his death in 2009, his friends chose to donate part of his remaining estate to be used to write a Sefer Torah that would find a permanent home at Misaskim as an eternal memorial for Zev ben Mordechai Solomon A”H.

Wednesday, April 17th – A FDNY appreciation event was celebrated at Misaskim’s headquarters to honor the brave men and women of the FDNY who rescued 4 Sifrei Torah during a 2-alarm fire that occurred at the Horodenka Shul in Flatbush on April 4th. More than 70 firemen were called in on that day to battle the blaze at 1073 East 27th Street.

During the event, Misaskim displayed the partially burned atzei chaim of the sifrei torah to demonstrate how close these scrolls were to being lost to the fire, R”L.