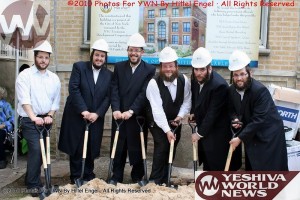 The air was electric on Eleventh Avenue on Sunday afternoon, Rosh Chodesh Tamuz, and the crowd was large and festive. The occasion was the groundbreaking ceremony by Bikur Cholim of Boro Park of its much needed expansion into larger quarters to meet the growing demands for its services.

R’ Yaakov Hirsch, Treasurer, and a member of the Bikur Cholim Board of Trustees was the master of ceremonies. He spoke about the past and future of the organization, emphasizing the new programs that Bikur Cholim has inaugurated in the last few years which are urgently needed by the community.

The dais was graced by a number of the founders and long-time askanim of Bikur Cholim and a variety of local political leaders who, over the years, were instrumental in helping Bikur Cholim meet its financial challenges and have been the driving force for the governmental funds that are to be used for constructing the new expanded Chessed Center.

Fortunately for Bikur Cholim, some of these askanim are still active in the organization and still provide valuable guidance to the current administration; people like Rav Yosef Fischman, R’ Mendel Berg, R’ Shulem Mermelstein and R’ Saul Rosenberg, whose names symbolize what chesed truly means and how it is to be dispensed. These people carried Bikur Cholim “on their backs” in the early formative years. They are people of vision and devotion to the klal. In words filled with emotion, Chaim Schoenblum, Executive Officer of Bikur Cholim, introduced these askanim to the large crowd. He also made special mention of Mr. Leo Loffler, one of the founders, who was unable to attend.

Also in the audience were families of a number of other founders and askanim who are no longer with us; such giants of chessed as R’ Loiche Glueck z”l; R’ Isidore Greenberger z”l; Rav Moshe Neeman z”l; R’ Mechel Sauber z”l; R’ Yosef (Joe) Ash z”l; R’ Dovid Moskowitz z”l; and the unforgettable Rabbi Dovid Grossman, z”l.  These special individuals were certainly in a class by themselves when it came to mesiras nefesh in helping those in need. Each one in his own right was an “amud hachesed”. Rabbi Shmuel Steinharter, Executive Director of Bikur Cholim, spoke eloquently about the contributions these people made to our community and about their dedication to the needs of the klal.

Not present at the event because of other commitments, but welcomed from the dais, were Mayor Michael Bloomberg, State Senator and Conference Leader John Sampson, State Senator Diane Savino and NYC Council, Speaker C. Quinn, Councilmen Domenic Recchia, Lew Fidler, David Greenfield and Brad Lander; all close friends and supporters of Bikur Cholim.

Another highlight of the afternoon was the introduction of Mr. and Mrs. Elly Kleinman who are endowing the new “Kleinman Bikur Cholim Building”. Mr. Kleinman, a noted askan with many worthy chessed organizations, is a member of the Bikur Cholim Board of Trustees. Yisroel Hershkowitz, an Executive Officer of Bikur Cholim, spoke warmly about the Kleinman family’s dedication to mosdos hachesed and their well-known philanthropic endeavors. Mr. Kleinman responded with heartfelt words of Biku Cholim.

Bikur Cholim has been a mainstay in this community for close to 60 years. It started in a small storefront on 45th Street off New Utrecht Avenue in 1952. Its founders were survivors of the Holocaust who not only sought to establish a better life for their families who had escaped from the fires of Churban Europe, but also wanted to ensure that the Sheires Hapleitah benefitted from the same chessed institutions that existed in the “alte heim”. They established the first Chevra Kadisha Boro Park and began to help their fellow yidden who had medical issues, by contributing to both their financial and spiritual well being.

From this modest beginning, Bikur Cholim has grown tremendously as the community has evolved and as its challenges have increased.

When the blood crisis became prevalent in the 1980s, Bikur Cholim, at the behest of the local Rabbonim, commenced its community blood drives. In the last three years alone, it has raised more than 15,000 units of blood on behalf of Maimonides Hospital.

When parental abuse R”L caused a child to die, the Rabbonim again asked Bikur Cholim to galvanize its resources and start a Family Crisis Intervention Program, which is directed at helping children at risk.  Just recently, Bikur Cholim greatly expanded this service by partnering with the Chayeinu organization which assists children from broken homes.

From children at risk, Bikur Cholim has moved to teens at risk, helping thousands of such teens at its “drop in youth centers” in Flatbush, with great success.

And the list goes on. The Holocaust Program assists over 2,000 survivors from Churban Europe with their essential needs. The Camp Scholarship Program helps children who desperately need a respite from a troubled home, have an enjoyable summer. Its revered Chevra Kadisha continues to serve the community “על טהרת הקודש”. Its large group of volunteers assists patients in local hospitals and those that are home-bound. Its Medical Equipment program lends wheelchair, walkers etc.. And its Medical Relief Program that has been in existence from the very beginning of Bikur Cholim, helps needy people pay their medical bills and provides medical referrals.

As the Boro Park and Flatbush communities grew, the need for Bikur Cholim Services grew as well. For the last 13 years, Bikur Cholim has operated out of its Eleventh Avenue location, which was built in large part through the generosity of the renowned cardiac surgeon Dr. Israel Jacobowitz.

Very quickly, the Jacobowitz building was bursting at its seams; hence the need for infrastructure growth. The new expanded Kleinman Family building will serve as a focal point for chessed for the Boro Park and Flatbush communities for decades to come. Various organizations have already expressed a desired to relocate to this new chesed center. The future is B”H bright for Bikur Cholim, an organization that is vital for all of us.