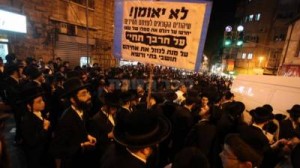 Hundreds of members of the Meah Shearim community and supporters protested at Kikar Shabbos on Wednesday, decrying the recent violence that has plagued the community.

The protest was against the violence seen in Meah Shearim and Geula over recent weeks, which culminated in the violent beating of a Meah Shearim resident by a group of chassidim a night earlier. The victim of that beating remains in Hadassah Ein Kerem Hospital.

Participants in the event had harsh words for Gerrer Chassidim, accusing them of trying to take over their community.

Mrs. Miriam Hirschman, the wife of the victim of the beating in Geula, told Kikar Shabbat on Wednesday night that she received a telephone threat saying “we are going to kill you”.

Rav Uri Sofer of Bnei Brak called to halt the violence, warning of what may emerge from this behavior, chas v’sholom “to kill one another…leading to an intifada”.

Rabbi Tzvi Bialistotzky from Bnei Brak did not make an effort to hide his delight, unwilling to condemn the beating attack. He explained that when a man whose store and home are attacked decides to defend himself, it is not called terror. He is responding appropriately so it is not terror. Actually, he called the attack “a relatively moderate response”, adding they cannot continue to strike out and not expect a retaliatory move.

Joining in was Zaka founder and director Yehuda Meshi-Zahav, who commented “that is the only language the sikrikim understand. These are people for whom violence is a way of life. Finally, someone is speaking to them in their own language”. He added that many who have a score to settle with Gur are trying to take advantage of the situation but in actuality, Gur was correct in this case.