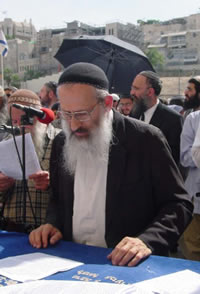 While Beit El residents continue davening, the government is still planning to evict the families residing in the Ulpana neighborhood of the Shomron community as was reported by YWN-ISRAEL.

Rav Shlomo Aviner Shlita, a posek in the dati leumi community and resident of Beit El is quoted as telling the tzibur that he will not take part in any protests against such a move should it be actualized chas v’sholom. The plan calls for expelling families from five buildings, each home to six families.

News1 quotes the rav, who told mispallalim during a Friday night drasha that if security forces are sent to remove the families from their homes, he would not take part in a protest. Aviner did not chas v’sholom side with such a plan, but explains that even if the government moves ahead with this “evil act”, then we are compelled “to lose with honor”. He cites three reasons for his hashkafa; (1) A protest is designed to influence others, primarily decision-makers and this is not relevant in this case; (2) Another reason is to instill fear in the other side, and this too is not applicable, as was seen during past expulsions. “The IDF is not afraid of tens of thousands of Jews or 30 million Arabs; (3) A protest is to express one’s dissent and this picture, one of Jews opposing Jews is not the sight we wish to send to the international media.

The report adds that two mispallalim got up and walked out as the rav delivered his drasha. A third mispallel waited until the end of davening and then shouted at the rav, explaining that his words simply weaken their battle against another expulsion.

YWN-ISRAEL NOTE: The Ulpana neighborhood is inhabited for 13 years. Residents purchased their homes legally, with government subsidized bank mortgages. Government agencies funded the construction and infrastructure of the community, now declared illegal by the High Court of Justice.