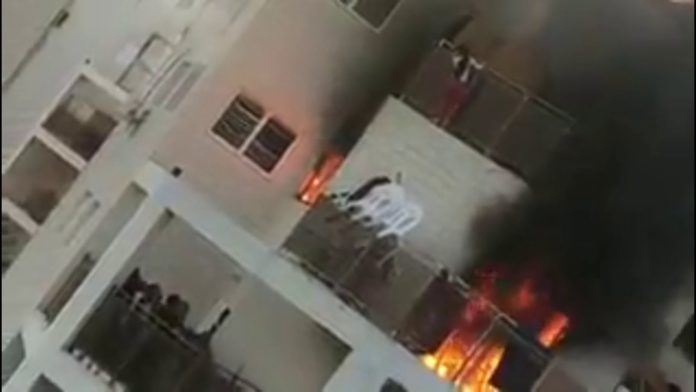 A fire erupted on Sunday evening on the seventh floor of an eight-story building on David Elazar Street in Be’er Sheva. Teams from Israel’s Fire and Rescue Services evacuated numerous trapped people from the building while getting the fire under control. One girl, a two-year-old who was in critical condition at the scene underwent CPR and resuscitative efforts by United Hatzalah volunteers and Magen David Adom units that were waiting for the trapped persons to be evacuated. The girl R”L later died in Soroka hospital according to a statement issued by the hospital spokesperson.

Another young boy, aged four, was seriously injured, also due to smoke inhalation, and is alive but on a respirator. According to Soroka’s statement, the boy is still in danger.

A mother and two other children, one six-months-old, another eight-years-old were lightly injured. United Hatzalah’s Psychotrauma and Crisis Response Unit were dispatched to help the family and onlookers who were traumatized by the events. Soroka hospital social workers and psychologists are accompanying the family and assisting them

In a dramatic video caught by onlookers, a young girl jumped out of a burning apartment two a crowd that had gathered some two stories below in order to catch her. She was moderately injured due to smoke inhalation.

First Sergeant Aharon Malka of the local Fire and Rescue Service Department said: “The shift commander instructed us to head up to the last floor. We burst into one of the bedrooms upstairs and saw two children’s beds. We could barely see anything at all. We felt our way around the room and came across a young girl on her bed as well as a young boy hiding under the second bed. Utilizing our sense of touch alone we extricated them from the room.”

Passerby Roey Peretz was driving near the building when he saw the flames. “We saw the flames and we stopped the car,” Peretz recounted. “We saw that  everything was locked so we climbed up into the building with other friends. We saw a young girl out on her balcony amid a lot of smoke. We grabbed a blanket and together with three other residents of the building held it out so that she could jump into it. We called to her to tell her to jump. There was a lot of smoke all around, but finally, she did jump.