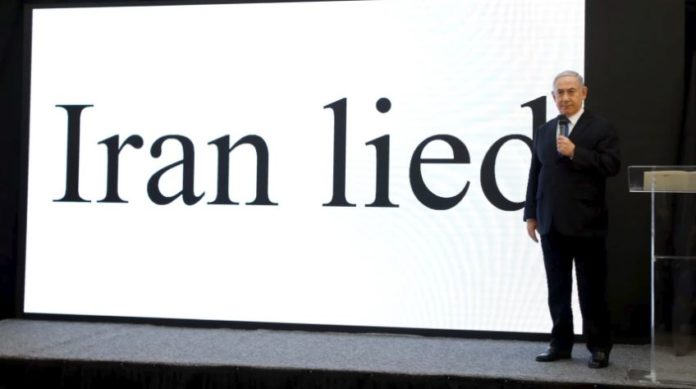 Prime Minister Binyamin Netanyahu canceled a planned appearance in Knesset on Monday evening, and instead addressed the nation at 8:00PM ET. Netanyahu spoke in English, and the speech was broadcasted live on television networks around the world.

Netanyahu says his government has obtained “half a ton” of secret Iranian documents proving the Tehran government once had a nuclear weapons program.

Calling it a “great intelligence achievement,” Netanyahu said that the documents show that Iran lied about its nuclear ambitions before signing a 2015 deal with world powers.

While relying on his trademark use of visual aids, Netanyahu claimed that the material showed that Iran cannot be trusted, and encouraged President Donald Trump to withdraw from the international deal with Iran next month.

Netanyahu furiously fought the deal while President Barack Obama was negotiating it, and he has been a leading critic since it was signed. He says it does not provide sufficient safeguards to prevent Iran from reaching a nuclear weapons capability.

Netanyahu has found a welcome partner in Trump, who has called the agreement “the worst deal ever.”

Trump has signaled he will pull out of the agreement by May 12 unless it is revised, but he faces intense pressure from European allies not to do so. Netanyahu said he would share the newly uncovered information with Western allies and the international nuclear agency.

Netanyahu began his presentation with a series of video clips of Iranian leaders saying their country never pursued nuclear weapons.

Netanyahu provided no direct evidence that Iran has violated the 2015 deal. Also, the deal is not believed to have banned Iran from keeping its old records.

But Netanyahu said the existence of the documents proves that Iran is waiting to resume its race to build a bomb.

BREAKING: The boy who can’t stop crying wolf is at it again. Undeterred by cartoon fiasco at UNGA. You can only fool some of the people so many times. pic.twitter.com/W7saODfZDK

Earlier, Prime Minister Netanyahu summoned his Security Cabinet for an urgent session following the latest attack in Syria, which is attributed to Israel. As usual, there is silence in Israel regarding the major attack that reportedly hit a Syrian base that manned by Iranian forces.

In the meantime, Secretary of Iran’s Expediency Council, Mohsen Rezaei warned Iran will level Tel Aviv to the ground, following the latest aerial assault in Syria which is blamed on Israel.

The Fars News Agency quoted Rezaei saying that Tehran will respond to the “slightest unwise news against Iran, we will level Tel Aviv to the ground and will not give Netanyahu any chance to flee”.

Rezaei also gave an interview to the Hizbullah-affiliated al-Manar TV, in which he also mentioned the United States, explaining “The US and Israeli leaders do not know Iran and do not understand the power of resistance, and therefore, they continuously face defeat”.

Veteran IDF correspondent Carmella Menashe commented on Kan-11 Monday evening that the latest attack is by far the largest and most comprehensive, signaling that the target was a serious one. Kan News quotes the New York Times explaining 200 surface-to-surface missiles were taken out in the latest attack, and commentators explain the attack might have been an effort to prevent an Iranian retaliatory attack against Israel.

That said, the fact that the Security Cabinet was summoned on Monday afternoon has many believing the situation is quite serious and that Israel does expect an Iranian retaliatory attack in some form. It appears that such an attack would likely be against a military and not a civilian target, according to some veteran military analysts, who think Tehran is more likely to target a Golan Heights base rather than Tel Aviv despite the threats made in the media.