In light of yesterday’s attack in Syria, the Security Cabinet met on Monday, 15 Iyar, in an unscheduled meeting in Tel Aviv at 1:30PM.

In the official invitation sent to cabinet ministers, the subject of the discussion was written: “An Intelligence-Political Update on the Nuclear Agreement with Iran.”

As mentioned, the extensive and historic attack carried out last night on Syrian soil damaged two targets. The first is the base of the 47th Brigade on the outskirts of the city of Hama, and the second is a base north of the Aleppo Airport.

According to reports, there are “important warehouses” belonging to the Revolutionary Guards of Iran and the Syrian army. In other reports, Iranian transport planes that recently delivered heavy cargo to this area were reported.

The Israeli assessment is that Iran – which has at least 18 casualties from this attack – cannot restrain itself, especially when it joins the previous serious attack attributed to Israel on the Syrian T-4 base in Syria.

The AP reports that the attack left 26 dead – mostly Iranians,

Iranian media gave conflicting reports about the overnight incident amid speculation that it was carried out by neighboring Israel.

A day earlier, U.S. Secretary of State Mike Pompeo ratcheted up the Trump administration’s rhetoric against Iran and offered warm support to Israel and Saudi Arabia in their standoff with Tehran.

“We remain deeply concerned about Iran’s dangerous escalation of threats to Israel and the region and Iran’s ambition to dominate the Middle East remains,” Pompeo said after a nearly two-hour meeting with Israeli Prime Minister Benjamin Netanyahu. “The United States is with Israel in this fight,” he added on his first trip abroad as America’s top diplomat.

MORE: Explosion at military site in Syria was so powerful it registered as a 2.6-magnitude earthquake, several reported killed https://t.co/M76H2rbJEH

The Britain-based Syrian Observatory for Human Rights said the late Sunday night attack appears to have been carried out by Israel and targeted an arms depot for surface-to-surface missiles at a base in northern Syria known as Brigade 47. The Observatory said four Syrians were also among the casualties.

It said the death toll could rise as the attack also wounded 60 fighters and there were several others still missing.

However, an Iranian semi-official news agency denied reports that Iranian fighters were killed or that Iranian-run bases were hit. The Tasnim news agency quoted an unnamed Iranian informed official in its report but did not elaborate on the denial.

Another semi-official news agency, ISNA, said the strike killed 18 Iranians, including a commander, in a suburb of the central city of Hama. It cited “local sources and activists” for its report.

The missiles targeted buildings and centers which likely include a weapons depot, ISNA reported.

An official from a regional alliance that includes Iran, Syria and Hezbollah confirmed that the strikes near Hama had hit a storage facility on the base and said they had destroyed 200 missiles. The official spoke on the condition of anonymity because he was not authorized to speak to journalists.

The Syrian government-owned Tishrin newspaper quoted what it called “sources on the ground” as saying that the attack on military positions in Aleppo and Hama provinces consisted of nine ballistic missiles fired from American-British bases in north Jordan. The report could not be independently confirmed.

There was also no immediate comment from Israel, which rarely confirms or denies its attacks in Israel.

President Donald Trump has set a May 12 deadline to decide whether to pull out of the Iran nuclear deal – something he appears likely to do despite heavy pressure to stay in from European and other parties.

#BREAKING
Identified; the weapons which were used yesterday against the #Iran/ian base near #Aleppo #Syria
Were the #US made glide bombs the GBU-39B
Here’s two images showing the GPS/anti-jam device of the bomb
And the bomb glide wings.

The primary suspect is #Israel pic.twitter.com/PX0mKiUPJP

Tehran has sent thousands of Iran-backed fighters to back Syrian President Bashar Assad’s forces in the country’s seven-year civil war.

The attack comes amid soaring tensions between Iran and Israel following an airstrike earlier this month on Syria’s T4 air base in central province of Homs that killed seven Iranian military personnel. Tehran has vowed to retaliate for the T4 attack.

Syria, Iran and Russia blamed Israel for that T4 attack. Israel did not confirm or deny it.

On Monday, Iran’s Supreme Leader Ayatollah Ali Khamenei said the time when Iran’s enemies can “hit and run” is over.

“They know if they enter military conflict with Iran, they will be hit multiple times,” he said in comments during a meeting with workers, according to his website. He did not specifically refer to the latest attack in Syria. 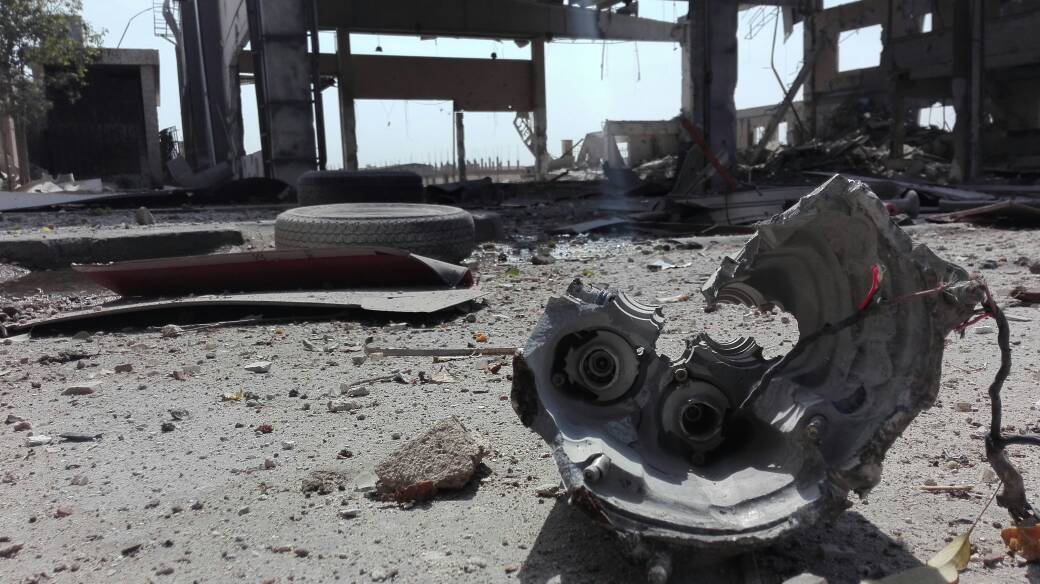 Israel Defense Minister Avigdor Lieberman said in an interview published last Thursday that his country will strike Tehran if attacked by archenemy Iran, escalating an already tense war of words between the two adversaries.

Iran’s semi-official Tasnim news agency on Monday quoted chief of Fatimayoun Brigade, an Iran-backed Afghan militia in Syria fighting alongside Iranian forces, as saying their base near Aleppo was not targeted during the strikes and they had no casualties. It did not elaborate.

Lebanon’s Al-Akhbar daily, that is considered close to the militant Iranian-backed Hezbollah group and the Syrian government said the attack targeted “important arms depots used by the (Syrian) army and Iran’s Revolutionary Guards.” It said that missiles used in the attack appear to have been bunker buster. 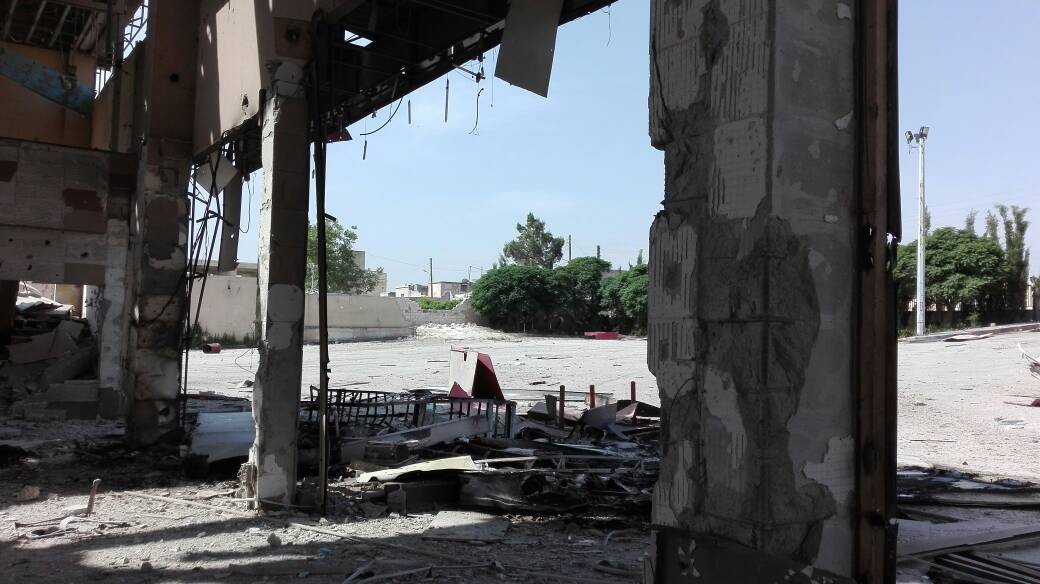 Syria-based opposition media activist Mohamad Rasheed said that base that came under attack is about 10 kilometers (7 miles) outside the city of Hama, adding that the airstrike led to several explosions in the arms depot. He added that the area is known as the Maarin Mountain or Mountain 47.

Rasheed said that some of the exploding missiles in the arms depot struck parts of Hama, adding that residents in areas near the base fled their homes. He said the base has been run by Iranian and Iran-backed fighters from Lebanon, Iraq, Afghanistan and Pakistan. 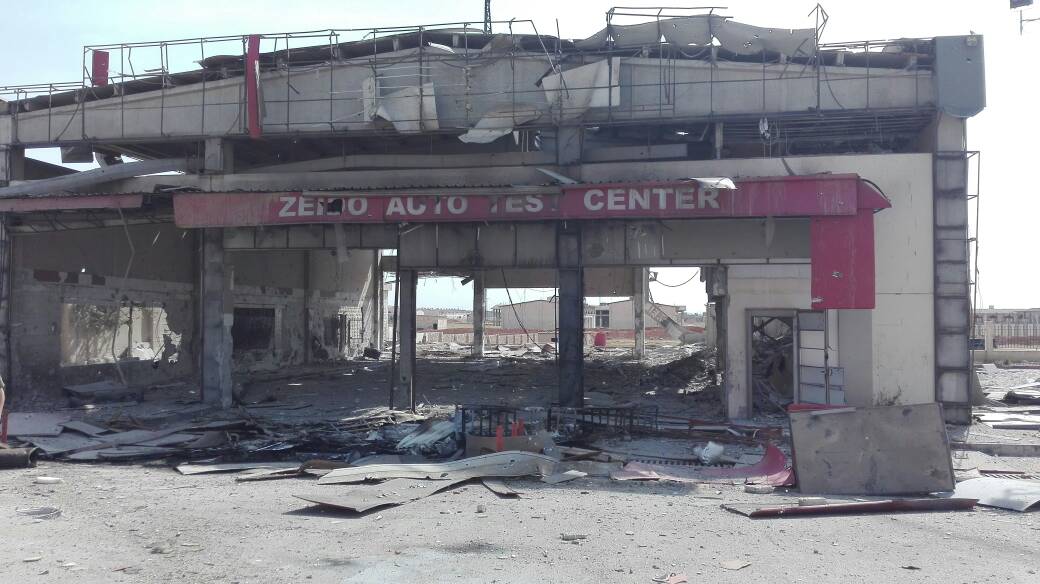