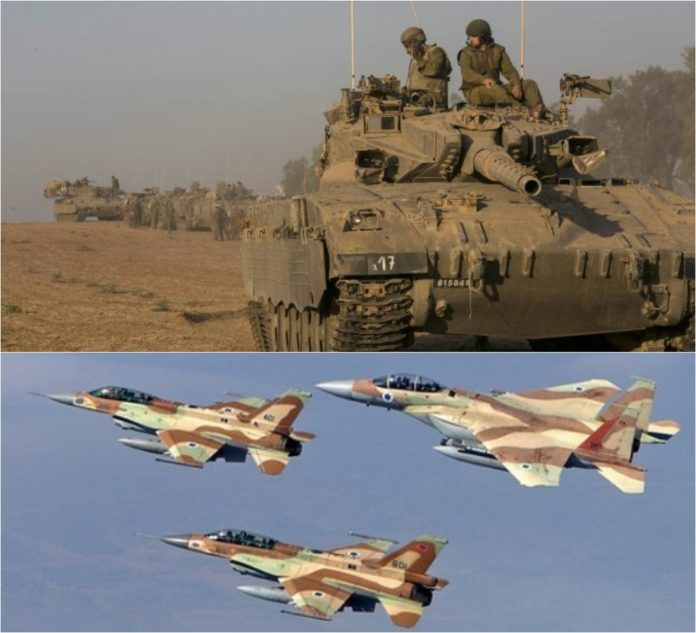 The reported attack came shortly after U.S. President Donald Trump declared he was withdrawing from the 2015 international nuclear deal with Iran, calling Tehran a main exporter of terrorism in the region.

Israel has instructed local authorities in the Golan Heights to “unlock and ready (bomb) shelters” after identifying what the military described on Tuesday as “irregular activity of Iranian forces in Syria”.

#BREAKING: Large explosion reported inside military base near Damascus #Syria (Unconfirmed image from the area) pic.twitter.com/jpU4Dfwc7Q

Israeli media said the order to prepare bomb shelters was unprecedented during Syria’s seven-year-old civil war, in which Israel is formally neutral.

In its statement, the IDF further said that its defense systems had been deployed “and IDF (Israel Defence Force) troops are on high alert for an attack, and any aggression against Israel will be met with a severe response.”

A number of reservists were also called up from the air defense, intelligence and Home Front Command units.

#BREAKING: Israeli IDF says it has identified “unusual movements of Iranian forces in Syria”, ordered the opening of Shelters in the Golan Heights and are saying: “We are on hightend alert, and forces are deployed & we are ready for all scenarios” (Video: @IDFSpokesperson) pic.twitter.com/zxwL222dRX

The official news agency SANA said the missle attack occurred in the countryside in Kisweh, just south of Damascus, an area known to have numerous Syrian army military bases. It did not elaborate. Syrian TV reported earlier large explosions in the area.

There was no immediate comment from Israel, which almost never confirms or denies airstrikes in Syria. Such strikes have become more frequent recently, amid soaring tensions between regional archenemies Israel and Iran.

Iran has vowed to retaliate to recent Israeli strikes in Syria targeting Iranian outposts in the country. They include an attack last month on Syria’s T4 air base in Homs province that killed seven Iranian military personnel, for which Tehran has vowed to retaliate. On April 30, Israel was said to have struck government outposts in northern Syria, killing more than a dozen pro-government fighters, many of them Iranians.

The IDF said it is prepared for “various scenarios” and warned “any aggression against Israel will be met with a severe response.”

Israel has warned it will not tolerate Tehran establishing itself militarily on its doorstep in Syria.