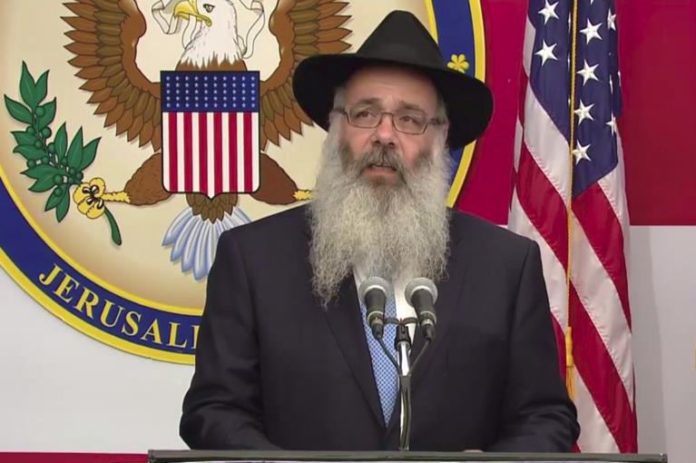 Fifty-one years after the soldiers of the Israel Defense Forces entered the gates of the Old City of Jerusalem, reunifying the holy city after almost two decades of Jordanian occupation, the United States of America officially moved its embassy to Israel’s capital city with a festive ceremony at the building in Jerusalem.

The move, a perennial presidential campaign promise supported by U.S. leaders on both sides of the aisle for decades, was announced by President Donald J. Trump in December, 2017. The opening took place today in the presence of U.S. Ambassador to Israel David M. Friedman, Israeli Prime Minister Benjamin Netanyahu, and American and Israeli dignitaries.

The gathering was addressed by Rabbi Zalman Wolowik, director of Chabad-Lubavitch of the Five Towns in Cedarhurst, N.Y., and a long-time Torah study partner of Ambassador Friedman.

Emphasizing Jerusalem’s place as the eternal capital of the Jewish people, Wolowik noted that “truth is not determined by popular opinion—it is eternal not ephemeral, unchanging not relative. Truth stands the test of time. While empires, ideologies and philosophies rise and fall, the Jewish people’s attachment to this holy city has never waned or faltered—it is truth. King David imagined a Temple here, and his son Solomon built it here; the Prophets pleaded, cajoled and thundered here. From cradle to grave, for thousands of years, Jews of every extraction have had the beautiful name of this beautiful city on their lips, Yerushalayim. Jews have lived here, and when they didn’t, they directed their prayers here. That is truth.”

Thanking President Trump and the United States for “standing for this truth,” he prayed that other countries follow America’s example in “affirming the Jewish people’s eternal bond with this holy city.”

Peace, Wolowik pointed out, is a quintessentially Jewish idea and aspiration, symbolized in the very makeup of Jerusalem. “The beauty of Jerusalem,” Wolowik said, quoting the Rebbe, Rabbi Menachem M. Schneerson, of righteous memory, “ … is that its walls are unifying walls. Within the confines of Jerusalem, every man, woman and child became part of something greater than themselves.”

But peace is the twin of truth, and the rabbi concluded by praying that “from today’s exalting of truth, there flow to Jerusalem, her neighbors, and to the entire world, a true and perfect peace. … In the words of the Psalmist who sang his longing for peace not far from right here, ‘Pray for the peace of Jerusalem, may those who love you be at peace…’”