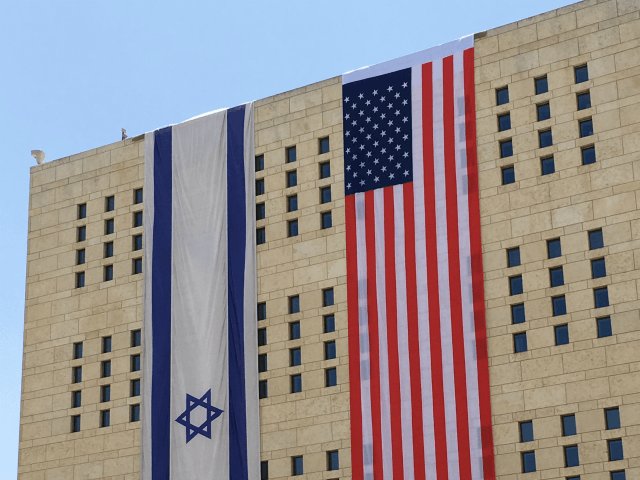 Miracles are happening all around us.

In a time of astounding occurrences around the world, the greatest was this week’s official opening of the United States Embassy in Yerushalayim. Perhaps we can even use the phrase “Nes Godol Hayah Poh.”, for the open miracle of President Trump changing the course of history and doing what no President has ever done, despite their false promises. As always, we are cognizant of Hashem’s guiding hand in this and all events making history around the world. We know that the real capital of Israel is on Har Habayis, the Yerushalayim consecrated from time immemorial.

The images are startling, and represent the realities of the world. Simultaneously, we see remarkable photos of the Embassy opening event and rejoicing in the streets of Yerushalayim; while mere miles away in Gaza, over 50,000 Hamas militants attempt to destroy Israel’s border fence and chas v’sholom enter our holy land. The fact that the Israeli Army was able to prevent a catastrophic breach in the fence, and be firmly backed by the United States in their reluctant use of force, is a double miracle in and of itself. We pray for continued siyata dishmaya, and hope that pressure is not put on Israel to make concessions in return.

By criticizing Israel instead of Hamas, the hypocrisy of world leaders and the United Nations is obvious, but nothing new. Imagine what they would do to secure their own country’s borders if they were attacked by 50,000 angry, murderous neighbors. Yet, they are ready, willing and able to criticize and demonize Israel at all times. Rav Pam zt”l predicted this, in his explanation for the creation of the United Nations. He said it was built as a living and official document that Hashem will show to the nations of the world at the time of Moshiach’s arrival, to refute their claims that they did all they could to help the Jews.

What adds salt to our wounds, is the media’s coverage of the attack on Israel. The New York Times ran a headline “Israel Kills 58 In Gaza”, without a word explaining that it was done in self-defense, to protect the Land of Israel. The New York Daily News had the audacity to join “the club” by designing a cover rife with anti-Semitism and anger at President Trump, by mocking his daughter Ivanka, and simulating her pointing at the Gaza casualties and smiling. They were able to use twisted creativity to create a cover headline “55 slaughtered in Gaza”, but could not find the decency or space until page 20 to explain that “some 50,000 Palestinians from Gaza flooded the border in 12 different locations, planting explosives and firing on troops.” They even admitted that “the rolling riots were an attempt by Hamas to spark a long-term violent uprising – and, if possible, to enable terrorists to infiltrate Israel.”

Palestinians are dying for a photo-op, pawns of their cruel leaders whose terrorism is selfishly inflicted even on their own family and friends. This waste of human life is encouraged by the cowardly Hamas leadership, who sit securely in their hideouts while sending both young and old to their deaths.

As terrorists try to infiltrate our homeland, our brave soldiers risk their lives every day to protect us. The “yodayim yedei Esov” are counteracted by our “Kol kol Yaakov”, the heartfelt sounds of Torah and Tefillah that have preserved our people for thousands of years. Remarkable photos of soldiers saying Tehillim and learning Torah on the Gaza border, machine guns perched on their shoulder, is a testimony to the loftiness of Klal Yisroel.

Last week, I was zoche to hear a shiur from Rav Dovid Feinstein, shlita, who asked on the posuk “Ki savo’u el ha’oretz asher ani nosen lochem” – Why the need to stress that Hashem gave it to us, isn’t that obvious? He answered with a powerful message. The Torah stresses “asher ani nosen” to remind the person that Hashem is the “Landlord” of Eretz Yisroel, and we have to “pay the lease” through the Torah and Mitzvos that He wants of us. Living in a land for a long time can make a person forget he is just a “renter”. Time causes complacency and forgetfulness, as we unfortunately experience with Holocaust denial. Rav Dovid Feinstein’s message is so important in these trying times. We all must realize that it is the Torah and Mitzvos that truly guarantee the security of Eretz Yisroel and the welfare of Jews around the world.

We celebrate the US Embassy’s establishment in Jerusalem, but pray for the day of “v’liYerushalayim ircha b’rachamim toshuv”, when we truly return to Yerushalayim. At that time, we will be zoche to the permanent establishment of Hashem’s “Embassy”, the Bais Hamikdash in Yerushalayim Ir Hakodesh. Only then will we truly celebrate, free of terrorism, and free to visit Hashem’s “Embassy” with the coming of Moshiach, speedily in our times.