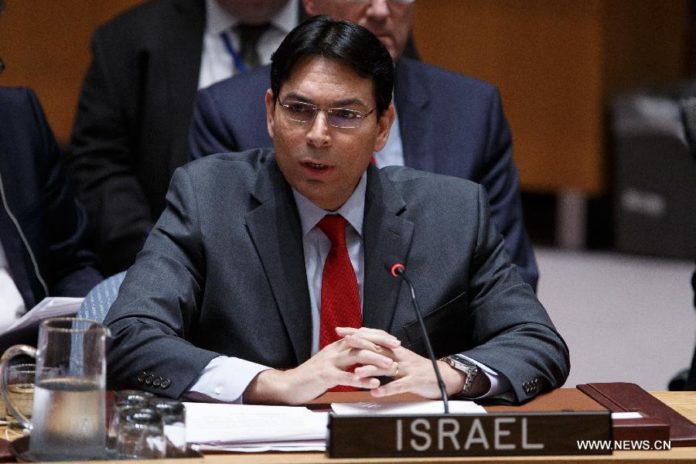 Kuwait is urging the Security Council to condemn Israel’s use of force against Palestinian civilians “in the strongest terms,” especially in the Gaza Strip, and to deploy and international force to protect civilians.

A draft resolution circulated by Kuwait, which is the Arab representative on the council, also demands that Israel “immediately cease its military reprisals, collective punishment and unlawful use of force against civilians, including in the Gaza Strip.”

Israel’s Ambassador Danny Danon responded to the draft resolution, saying, “The cynicism and attempts to distort reality have reached a new low. Israel will continue to defend its sovereignty and the security of its citizens against the terror and murderous violence of Hamas.”

“This shameful draft resolution is a proposal to support Hamas’ war crimes against Israel and the residents of Gaza who are being sent to die for the sake of preserving Hamas’ rule,” he said in a statement.

The United States has defended Israel’s actions in Gaza and will very likely veto the resolution if it’s put to a vote.

Kuwait’s effort comes after the Security Council couldn’t agree even on a statement about a confrontation in Gaza Monday that left nearly 60 Palestinians dead – nearly all of theme Hamas terrorists.

Kuwait tried Monday to get the council to issue a statement expressing outrage at the killings and seeking an independent investigation, among other things. The U.S. blocked the statement, saying it was one-sided and faulting it for not mentioning incitement of violence by Hamas, the Islamic terrorist group that rules Gaza and led the demonstration.

The Kuwaiti draft resolution calls for measures to be taken to guarantee the safety and protection of the Palestinian civilian population, including through the deployment of “an international protection mission.”

It would reaffirm the council’s willingness to respond to armed conflict where civilians are being targeted or aid to civilians is being deliberately obstructed and says this could include considering “appropriate measures” — U.N. language for sanctions.

The draft calls for “the full lifting of the blockade and the restrictions imposed by Israel on the movement and access into and out of the Gaza Strip.” This includes “the immediate, sustained and unconditional opening of the crossing points” to allow humanitarian aid, commercial goods and people to enter and leave in accordance with international law, it says.

The draft expresses “grave concern at the escalation of violence and tensions and the deterioration of the situation” in Palestinian territory, including east Jerusalem, since March 30 — and at the loss of civilian lives and high casualties.

It urges immediate and unimpeded aid to civilians in Gaza, “immediate and significant steps” to stabilize the situation on the ground.

The draft calls for intensified efforts by Secretary-General Antonio Guterres and the U.N. Mideast envoy Nikolay Mladenov to help deter violence, protect civilians, and create “an environment conducive to dialogue.”

Senior Palestinian official Hanan Ashrawi said Palestinians were looking at past U.N. operations in various countries to see what form a protection effort might take.

The key is “the ability to affect behavior on the ground and to provide genuine protection,” she said at a news conference Wednesday at U.N. headquarters.

Hamas said Wednesday that 50 of the dead were members. Israel said that proves its point, while human rights groups said the protesters’ identities were irrelevant if they were unarmed and didn’t pose an immediate threat to soldiers’ lives when shot.