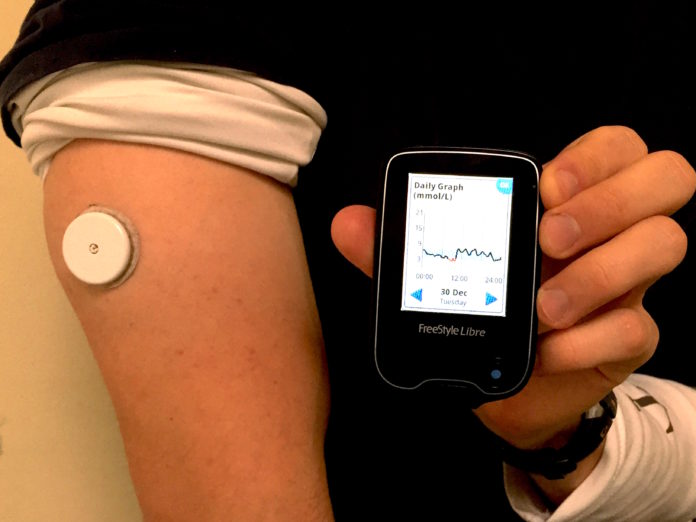 Imagine an electronic device that Gedolei HaPoskim have ruled that one is obligated to buy.  For this article, some of Klal Yisroel’s leading Poskim were consulted: Rav Dovid Feinstein Shlita, Rav Shmuel Kaminetsky Shlita, Rav Moshe Heinemann, Rav Shmuel Fuerst, Rav Yisroel Dovid Harfenes Shlita of Williamsburg, Rav Hershel Ausch Shlita of Williamsburg– here is what they had to say.

But before we discuss their opinions – let us look at the device.  It is called, “Free Style Libre” and, for diabetics, it is one of those rare halacha-changing devices that emerging breakthrough technologies can now provide.  Technically it is called a CGM device (Continuous Glucose Monitoring). [Update:  There are other CGM devices that are out there as well.  The author is unsure whether they require a corroborating stick test in order to make it function. This article discusses only the Libre – but speak to your doctor as to how the other CGM devices operate].

Until now, doctors and Poskim advised advanced diabetics to test their blood sugar even on Shabbos.  Testing one’s blood sugar involved the permitted violation of possible Torah prohibitions – that of drawing blood on Shabbos and that of Dash – squeezing the blood out of the body.   A lancet device was used to obtain a drop of blood from the diabetic.  The drop of blood was squeezed out of the finger and then placed upon a testing strip which fit snugly into the machine.

[Parenthetically, Abbott Laboratories (ABT) received FDA approval for its breakthrough CGM (continuous glucose monitoring) device in September of 2017 – since then they have gained 50,000 users a month. On April 6, 2018, of the 21 analysts considered in a Reuters survey, 81% (or 17) gave “strong buy” or “buy” recommendations on ABT stock. The remaining four analysts gave the stock “hold” recommendations. No analysts provided “sell” recommendations on ABT.]

Moishe Katz, United Refuah’s Director of Operations, responded to the inquiry with the following statement: “As a Jewish HealthShare organization, at United Refuah the unique needs and priorities of our community just as important to us as they are to our members. We look forward to making the patch available to our members at discounted pricing in the near future.”

It should also be known that with the newfound ability to check one’s blood sugar an unlimited amount of times each day, the motivation for diabetics to eat properly and listen to what the doctor says, is increased manifold.

BUT IS THERE AN OBLIGATION TO BUY THE DEVICE?

The short answer is “yes.”  This is what the Poskim have pretty much all responded in answer to the query.  This also seems to be the conclusion that one should make when analyzing what the Acharonim have written on the topic.

CONTRADICTION IN THE RAMAH

Seemingly, there is a contradiction between two different rulings of the Ramah that pertain to this issue.  The first one is in Orech Chaim.  The second one is in Yore Deah.

The Ramah in Orech Chaim (end of Siman 656) states that one is obligated to spend all of one’s money in order to avoid violating a Lo Saaseh in the Torah.  This is in contrast to the obligation of fulfilling a positive Mitzvah in the Torah where the obligation is only to spend one fifth of one’s money.  In other words, if someone is threatening to kill you, chas v’shalom, unless you violate a Torah prohibition – and you can get out of it by giving up all of your money – you have to do so.  In such circumstances we do not apply the principle of  “Ohnes D’rachmana patrei – the Torah exempted you when you are forced to do so.”  Seemingly, having to pay out money would not be considered grounds to be an exemption.

HOW THE ACHARONIM DEAL WITH THE RAMAH

In understanding this apparent contradiction, there is a debate between the Bach on the one hand and the Shach and TaZ on the other hand.  The Bach understands this Ramah as actually ruling that paying out significant money is an exemption.  The Bach disagrees with this ruling based upon the Orach Chaim Ramah.

The Shach and TaZ on the other hand rule that there is no contradiction and that this ruling of the Ramah is specific to the parameters of the laws of Nedarim – and has nothing to do with an obligation to fulfill Mitzvos in general.

There is yet a third Ramah in Yoreh Deah 157:1 that rules explicitly that one is obligated to give up all one’s money in order to avoid violating a lo saaseh in the Torah.

The conclusion? There is one Acharon, the Bach who holds that there is a Ramah which holds a large monetary expense is grounds for an exemption of a lo saaseh in the Torah.  Yet even the Bach disagrees with this implication.

POSSIBLE DISTINCTION BETWEEN THE CASES

But the truth is that this case might be different.  In our case, the violation is for the purpose of Pikuach Nefesh for Shabbos.  Could this be different than someone forcing another person to violate a prohibition?

Rav Moshe Yehudah Leib Zilverberg (1794-1865)  a member of the Beis Din of Rav Shmuel Salant and Rav Meir Auerbach and one of the founders of the Etz Chaim Yeshiva in Yerushalayim indicates that it is not different. In his responsa Zayis Ra’anan (Vol. I OC 2:2) he discusses a case of an ill person with virtually no hope who must travel on Shabbos to see expert doctors and whether or not there is an obligation for a distant community to support him.  Parenthetically, he notes that even for Shabbos violation for a Choleh the parameters of ohnes still do not apply to a choleh on Shabbos if he can avoid the violation by paying significant money.

WHEN TIME IS NOT OF THE ESSENCE

There is another issue as well.  Do we need to minimize Shabbos violation when it is a case of Pikuach Nefesh and time is not of the essence?  [All agree that when

There are two different views in the halacha regarding this point.  When there is plenty of time, and there is no concern of danger of any sort if there is a delay, the Ramah rules (OC 328:12) that we do attempt to minimize the Shabbos violations.  While the other view (that of the Bais Yoseph and the Rambam 2:11) is that no minimization is required.  Many in Ashkenazic Jewry have followed the custom that we do minimize Shabbos violation when no delay or confusion will be incurred on account of the minimization.    This is the view of the Raavya cited in the Ohr Zaruah, the Shiltei Gibborim, and the Maggid Mishna (Hilchos Shabbos 2:11 citing the Ramban) and is cited by the Ramah as the authoritative halacha .   This also is how the Mishna Brurah rules.

Some have suggested that according to the Rambam’s view – there is no need to minimize Malacha.  Others, however, feel that even according to the Rambam’s view one must still avoid Chillul Shabbos when it can be avoided.  The same debate exists in regard to the issue of whether or not Shabbos is Hutrah (completely undone) or Hudchah (set aside) regarding Pikuach Nefesh – life and death.

WHAT THE POSKIM HAVE SAID

Regarding Rabbi Ausch’s view that one should avoid it because of chovel b’atzmo, we find a fascinating debate.

The Rambam rules clearly (Hilchos Chovel Umazik Chapter five halacha one) that the prohibition of injuring a person applies both to injuring another person as well as to injuring oneself.  What is the source of the prohibition?  Is it biblical or Rabbinic in origin?  According to Rashi (folio 87a) and the Rambam (ibid), there is a verse in Parshas Ki Saytzai (Dvarim 25:3) that states regarding a court appointed lasher, “Forty lashes shall he strike him – he shall not add to it.” The words, “He shall not add to it” applies to a person who legally administers the lashes  to someone deserving of them.  The lasher may not to be excessive.  Certainly, the words would also apply to someone who was not liable for lashes at all!   This is also the opinion of the Rivash in his response #484 as well as the Yam Shel Shlomo #67.

However, according to Rabbi Levi Ben Chaviv (Responsa of the Maharalbach in the Kuntrus HaSmicha near the end “Od Ani Omer”), the son of the author of the Ain Yaakov, writes that if a person gives permission to be hit, he may do so in regard to pain that does not involve damage to the tips of limbs.  He writes that even though he did not see this clearly written anywhere, there is somewhat of a proof to it in the language of the Rambam.  The Rambam writes (Laws of Chovel Umazik  Chapter Five Halacha one):

If someone strikes a kosher person in Israel, whether it is a child or adult, a man or a woman, in a manner of nitzayon, he has violated a negative prohibition.  [Nitzayon means in violence and in dispute].  How might the Maharlbach deal with the fact that it is forbidden to do damage to oneself?  Perhaps the issue is striking versus injuring.  Asking someone to strike you or striking yourself might be permitted but injuring oneself would still be prohibited. [This distinction is actually made in Sefer Chemdas Yisroel, Ner Mitzvah #79 as cited in Responsa Ateres Paz 1:3 CM #7].  Thus, according to the Maharlbach there would be no prohibition of chavalah.

The Freestyle Libre Device will certainly mitigate Shabbos violation and will significantly help diabetics gain control of their sugar levels.  Many Poskim hold that it would be obligatory to purchase it – even if insurance does not cover it as of yet.