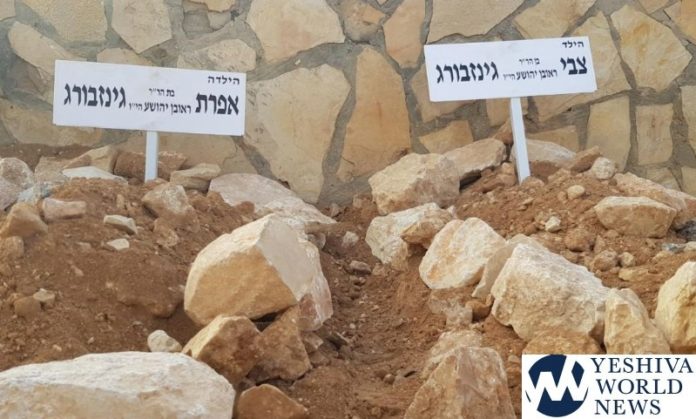 In Betar Illit, neighbors are trying to recover from the horrific evening that took place on Tuesday night, after a fire that broke out which R”L resulted in the deaths of siblings Tzvi (2) and his sister Efrat (4) Ginzberg. At least 12 other persons were injured.

According to the neighbors’ testimony, the building is five stories high, and the fire broke out in a second-floor apartment, which was completely burned. The firefighters searched the apartment to determine if others were trapped in the fire. When they reached the bedroom, they identified the siblings of the Ginzberg family, who were already lifeless.

The levayas for the children who perished in the blaze was held on Wednesday with a limited family presence. Three adults who were injured were transported to Shaare Zedek Hospital in Jerusalem along with two six-year-old children. The children and two of the adults have since been released. The last victim, a 22-year-old male, is listed in moderate condition and remains under observation.

According to fire department officials, the first unit arrived four minutes after receiving the call. They firemen who were first on the scene immediately began a sweep of the building for persons who might be trapped inside amid thick smoke and difficult conditions. They detected the two children behind the safety bars of a window. However, they were unfortunately unable to reach them in time and they perished in the blaze.

Neighbors describe hearing the horrific screams of the older sisters. They gave them some water and tried to calm them, and when the first ambulance arrived, they were given a blanket. One neighbor explains “I realized there was no one left to save. The children were alone in the apartment and neighbors came in, checking up on them from time-to-time. They wanted to get help when the fire started but it was too late”. This same neighbor insists the first response took 20 minutes, and not four minutes as the fire department reports.

Walla News quotes another neighbor who got out of the burning building. She too reported screams. When she first opened her door, she heard shouts “There is a fire and the children are trapped inside!” The neighbor explained to the media that she immediately got her children out, and some neighbors came out with bottles of water and blankets, albeit, to no avail.

Another neighbor, Itzik, spoke with Walla News too, explaining “The smoke was so thick you could not breath. We saw acrid thick smoke. I tried to get closer [to the apartment] but I was unable to breath. My wife just got out with one girl. Another neighbor got out two children from the same family. I ran from the home. I grabbed the children and ran and got out via a side entrance”. 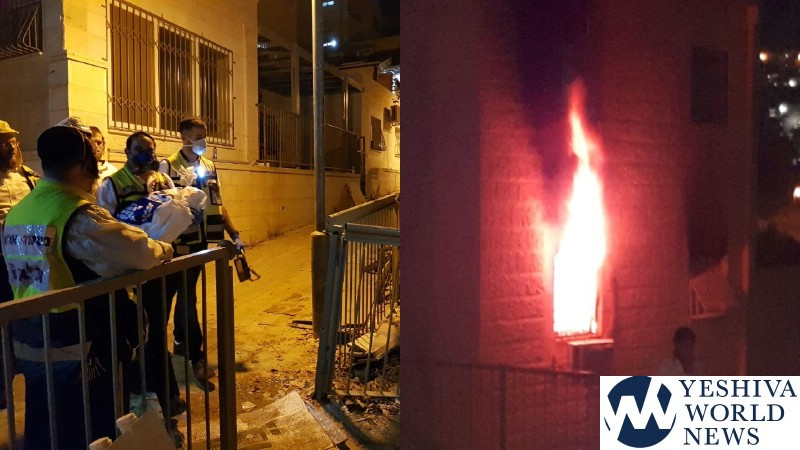 Fire officer Yeshayahu Bar-Dov is quoted telling Walla “We fought the blaze hard. It was a most difficult situation.” The preliminary investigation into the fatal fire according to Bar-Dov reveals firemen placed a ladder along the side, removed safety bars (sorigim) from windows and succeeded in bringing eight persons to safety. “Our firefighting rules teaches us to first save those who are visible and in immediate need of assistance. You must understand the dangers in such a fire, in which people can choke to death very quickly became of the carbon monoxide,” Bar-Dov explains.

When fire officials received reports some of the family members were trapped inside, the search continued, and the children were found lifeless in their beds. One trapped person was found, extricated in moderate condition. Fire officials add the hundreds of curiosity seekers outside did not help matters, and in fact, hampered their rescue efforts.

Another testimony by one of the neighbors reveals that some of the children were in the apartment and their parents were not there when the fire broke out. According to her testimony, a broken night-light set fire to one of the rooms in the house, which quickly spread to other parts. Yaki Hershkop, a member of the city council and among the first on the scene, reports that firefighters first mistakenly focused life-saving efforts on other apartments in the building. 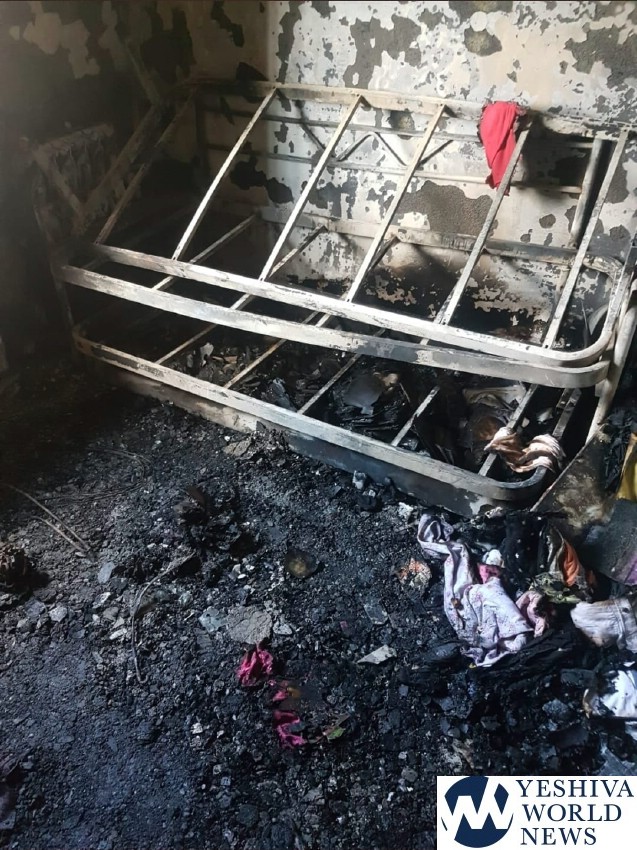 As reported earlier by YWN, the children who perished R”L are great-grandchildren of the famed Ponevezh Mashgiach, HaGaon HaRav Yechezkel Levinstein. Their grandfather is HaRav Shlomo Ginzberg, a Ram in Yeshivas Harei Yehuda in Bein Meir. The parents are Reb Yehoshua Ginzberg, an Avreich in Yeshivas Beis Yitzchak and the mother is Mrs. Devorah, daughter of Rav Nosson Dovid Shapira.

The official statement to the media from the fire department spokesman states: The call arrived at 9:08PM for a fire in an apartment in Knesset Mordechai in Betar Illit. A unit was immediately dispatched together with additional forces from other stations. The first crew arrived at 9:13PM and began searching for trapped persons inside a smoke-filled building and identified three trapped [people] behind bars in the window in front of the building and began efforts to rescue them. At the same time, two other trapped persons were rescued from a balcony. Another team which arrived on the scene got into the burning apartment and begin searching for victims to evacuate. They used equipment to extract the smoke. During their efforts they found the two children, who were lifeless when brought outside. In total, four units operated including a ladder truck. The tzibur is urged to remember to adhere to precautionary measures to prevent fires, including smoke detectors, which save lives.

A fund has been established to assist the family. 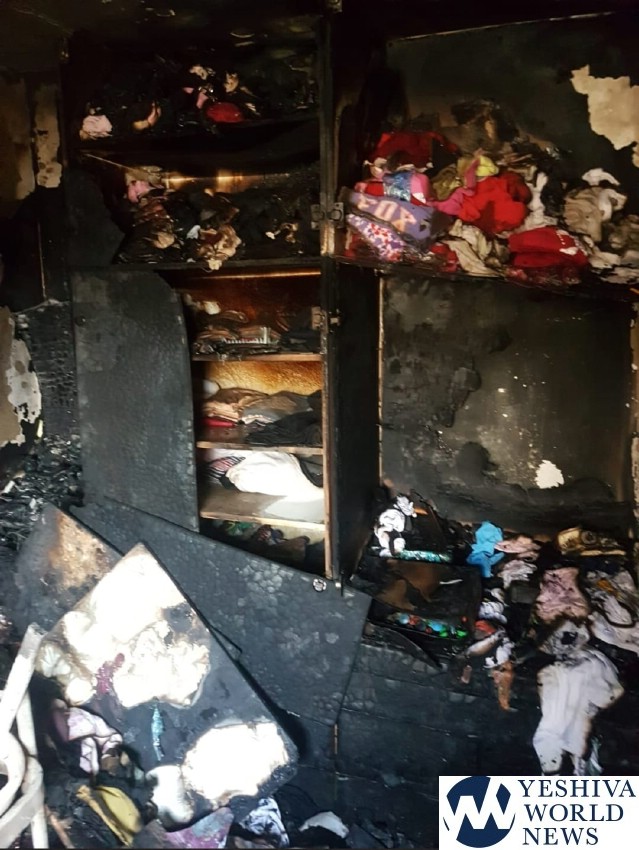 Horrific scenes from the fire in the Beitar Illit home where Tzvi (2) and Efrat (4) Ginzberg were R"L killed. At least 12 others were injured SEE MORE ON WWW.THEYESHIVAWORLD.COM

Justice Thomas Maps Own Course, At Wheel Of His 40-Foot Bus